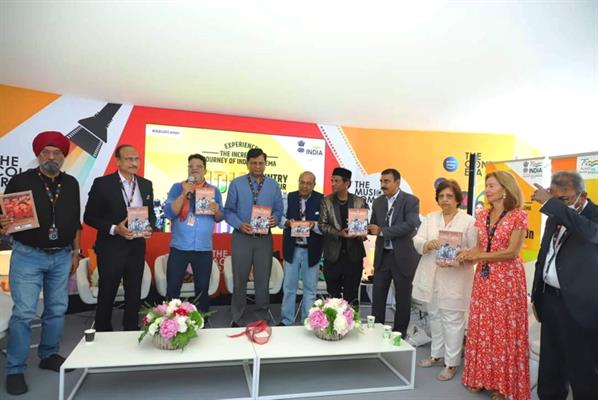 Noted Indian critic Ajit Rai's book 'Bollywood Ki Buniyaad' was recently launched at a special function held at the Indian Pavilion of the 75th Cannes Film Festival. 'Bollywood Ki Buniyaad' has been published by Vani Prakashan. Filmmakers and cinema lovers from all over the world were present at the launch ceremony held at the Indian Pavilion of the Cannes Film Festival
Apurva Chandra, Secretary, Information and Broadcasting Ministry, Government of India, while releasing the book said: “This book reminds us of the glorious history of Hindi cinema. The Hinduja brothers have played an important role in establishing the global market that our films enjoy today. Today, people have forgotten the stories included in this book. I myself didn't even know many facts that this book brings to light”.
Acknowledging India’s grand participation at the 75th edition of the Cannes Film Festival, Chandra added: “While India's participation in the Cannes Film Festival has been there since the beginning, this time India is the 'Honor of the Country' in the film market. Also, the largest number of Indians has come to the festival this year. This book will inspire us for the future. Ajit Rai has written extensively at the Cannes Film Festival and has been active in film journalism for several decades. Now the world has started listening to Indian stories.”
Prakash P Hinduja, President (Europe), Hinduja Group, who was also present on the occasion, said: “There is a lot of potential for co-production in the field of cinema between India and other countries of the world. This book will inspire the new generation of filmmakers and cinema lovers.”
Film producer Babi Bedi said: “The Hinduja brothers have a huge contribution to the Indian film industry and they should continue to do the same just as the book hints at.”
Renowned French actress Marianne Borgo said:  “The people of France love India very much. Both the countries should increase participation in the field of film production and film festivals. India has stories and France has the knowledge of art cinema. This book will inspire to revive the golden history of Hindi cinema.”
Arun Chawla, director general of the Confederation of Indian Commerce and Industry (FICCI), said: “There is a need for more such books. This book will take us into stories that have never been heard.”
The author of the book, Ajit Rai, said:  “The Hinduja brothers should have continued their cinema business in some form or the other for a few years now. Their endeavor to take Indian cinema around the world should have been documented which would inspire the coming generations. I suggest that a museum should be built in Mumbai which depicts this golden history of cinema. Today's young generation, who love cinema, should at least know how that period was and how Indian cinema got recognition across the world due to the efforts of the Hinduja brothers.
Tags : Ajit Rai cannes