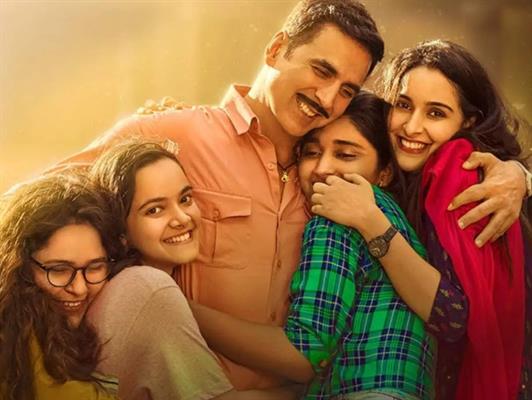 The team of 'Raksha Bandhan' is on a promotional spree. After Dubai, Pune, Indore, Hyderabad, Ahmedabad, Jaipur and Kokata promotions, team 'Raksha Bandhan' including producer Aanand L Rai, lead actor Akshay Kumar and the cast, have arrived in Lucknow.
Just a couple of days to go before the grand release of 'Raksha Bandhan' on 11th August and it looks like the team is doing everything they can to promote their film across the length and breadth of India.
On their arrival in Lucknow, the movie team were greeted by their ardent fans while in their way to the Amity University visit. Post interacting with students and clicking selfies with the the huge crowd, Akshay Kumar, Aanand L Rai and the cast headed to a mall for a press conference and interacted with the local media.
Interestingly, the team also visited Chikankari market at Hazratganj and it was a delight for the cast especially female cast to indulge in shopping of Chikankari Kurtis. They also went to famous Shukla Chaat Bhandar to have some amazing chaats.
Directed by Aanand L Rai, produced by Aanand L Rai and Himanshu Sharma in association with Zee Studios, Alka Hiranandani and Cape of Good Films, written by Himanshu Sharma & Kanika Dhillon, the music of 'Raksha Bandhan' has been composed by Himesh Reshammiya and lyrics are by Irshad Kamil.
Raksha Bandhan featuring Bhumi Pednekar, Akshay Kumar, Neeraj Sood, Seema Pahwa, Sadia Khateeb, Abhilash Thapliyal, Deepika Khanna, Smrithi Srikanth and Sahejmeen Kaur is all set to release on 11th August 2022.