Akshay Kumar gives pearls to his on screen sisters in Hyderabad 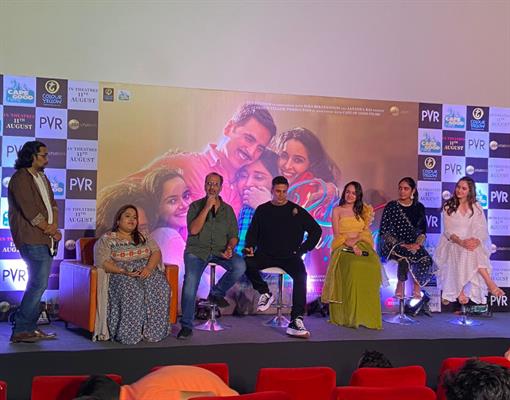 The team of Aanand L Rai's relationship drama 'Raksha Bandhan' is on a promotional spree, visiting different cities across the country ahead of its release on the auspicious occasion of Raksha Bandhan festival.
As per the multi-city tour promotions of the highly-anticipated movie and touring Dubai, Pune and Indore, the team of 'Raksha Bandhan' including Akshay Kumar, producer Aanand L Rai, and the cast including Sadia Khateeb, Smrithi Srikanth, Sahejmeen Kaur and Deepika Khanna recently visited Hyderabad.
Post Indore visit, the team left for Hyderabad to attend a press conference at a multiplex. Needless to say, a huge crowd went berserk after watching their favourite superstar and the movie team received great response from the people.
Interestingly, while Akshay was seen playing Ludo with his co-stars during his travel time to different cities, he lost the game and fulfilled his promise of taking them to the popular Chappan market in Indore to relish the local delicacies.
Continuing his sweet gesture of gifting something special to his on-screen sisters from each city during movie promotions, this time as the team is in Hyderabad which is also known as "City of Pearls" Akshay took the sisters to an famous MG market in Hyderabad for pearl shopping and continued the tradition of gifting.
Directed by Aanand L Rai, produced by Aanand L Rai and Himanshu Sharma in association with Zee Studios, Alka Hiranandani and Cape of Good Films, written by Himanshu Sharma & Kanika Dhillon, the music of 'Raksha Bandhan' has been composed by Himesh Reshammiya and lyrics are by Irshad Kamil.
Raksha Bandhan featuring Bhumi Pednekar, Akshay Kumar, Neeraj Sood, Seema Pahwa, Sadia Khateeb, Abhilash Thapliyal, Deepika Khanna, Smrithi Srikanth and Sahejmeen Kaur is all set to release on 11th August 2022.
Tags : Aanand L Rai Raksha Bandhan akshay kumar