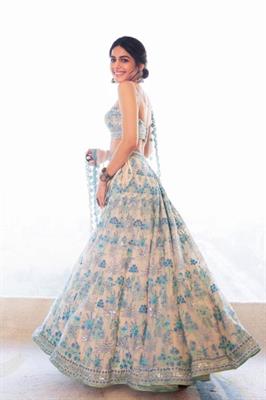 A day doesn't go by when Bollywood star Alaya F has not stunned us by her artistic approach on social media. She is one of the most active and interactive celebrities out there.
Recently Alaya F was seen donning an ivory dream lehenga by Anita Dongre which made her look elegant and chic. Aptly called the periwinkle dream lehenga, Alaya’s outfit has stunning motifs of the said flower embroidered in different shades of blue, from powder to azure.
Moreover, she accessorized her look by adding barely minimal statement earrings and bracelets to go with. With blush pink cheeks, nude lips, light eye makeup, curled eyelashes, and hair tied in a messy bun, the actress looks like a vision.
Have a look:
https://www.instagram.com/p/CcAvRgnPpQA/?utm_medium=copy_link
Apart from this, Alaya F is one of the most adored celebrities on social media. She often shares glimpses from her yoga and dance sessions. Not only is Alaya a great actress, but is also a great artist. She often shares her artwork with fans and buffs on social media. Her art includes DIY face painting and detailed doodling which often takes the internet by storm.
After marking a promising debut in Jawaani Jaaneman, Alaya is considered to be one of the most promising actors in Bollywood and has carved a space of her own.
Meanwhile, on the work front, Alaya F has an interesting lineup of films which includes ‘U-Turn’ with Ekta Kapoor, ‘Freddy’ with Kartik Aryan and an untitled project with Anurag Kashyap