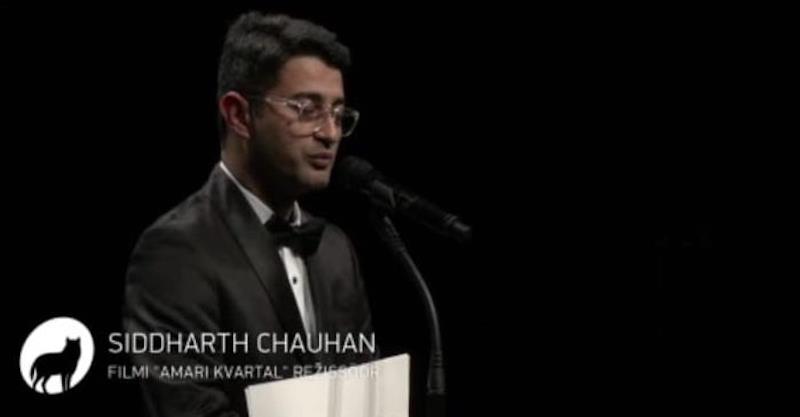 Writer-director Siddharth Chauhan’s debut feature film set in his home town Shimla, Amar Colony wins the Special Jury prize at the prestigious 26th Tallinn Black Nights Film Festival. The festival was held from 11- 27 November in Estonia.
Amar Colony was the only Indian film to be part of the ‘First Feature Competition’ at the festival this year.
The film will also have its India Premiere at the 27th International Film Festival of Kerala (IFFK), which will be held from 9-16 December 2022 in Thiruvananthapuram. Amar Colony is part of ‘Indian Cinema Now’.
The film revolves around three women going through their mundane lives, representing the human condition, in a chawl, starring Nimisha Nair, Sangeeta Agrawal and Usha Chauhan.
Amar Colony was the first project from Himachal Pradesh to make it to NFDC Film Bazaar’s Co-Production Market in 2018.
The film is produced by ‘Indie Film Collective’, a film initiative launched by Nisheeth Kumar and his friends in India in 2018. The film is produced in association with ‘Goopy Bagha Productions’. Indie Film Collective is a film initiative dedicated to the production and promotion of independent cinema in India and South Asia to begin with, but eventually globally.
Excited about the film winning an award, the debutant director Siddharth Chauhan said, “I am so overwhelmed with the love which the European audience and POFF (Festival) have shown towards our film. I really didn’t expect such a response to my film! I want to thank the jury for considering us worth it.”
Sharing his joy, the producer Nisheeth Kumar said, “Amar Colony winning the Special Jury Award is a dream come true. Siddharth Chauhan is a filmmaker to watch in the years to come."
Therese Malvar, the co-juror for the First Feature Competition in her statement on the film said, "This film delighted us with a bold and innovative presentation of a small town community whose frank Sensuality and unabashed pursuit of urges, both human and divine, are set against the resonant backdrop of a culturally rich and deeply personal setting. The director daringly takes us by the hand and leads us on a journey to his world, introducing us to his characters and their lives with affection and often with humor. We presented the Special Jury Prize for originality of vision to Amar Colony"
Synopsis:
Meera is beautiful, pregnant and in search of some spice in her life. Mohit is young, idle, and lives next door with Devki, his abusive mother. Meera has a boring and absent husband. But wait to see what the guy is hiding. Her aunty Dunga is old and hopes to become immortal, her other half has a secret in his shop nobody knows about, except his young grandchild who is smarter than it seems. They all live in a dilapidated building called Amar Colony.
Director’s Note:
My goal was to take my audience on a tour inside this fantastic colony and show them what these three women were going through.A guest would never participate in the private affairs of these families and hence we enter their lives but move out just in time so that we do not begin to participate or develop an emotional connection. From that perspective, Amar Colony is both unusual and unconventional as a film. It neither strives to evolve dramatically nor does it make a promise of catharsis reaching a climax with a typical resolution. Starting from the Script, Characters, and Production Design to its Camera Language, there is something quirky that we have tried to achieve at all levels. For me, Amar Colony is about the emptiness embodied in Devki’s cage-like house, Meera’s loneliness among the tall empty corridors and the purposeless life of Durga going through religious delusions. Amar Colony is simply an experience of estrangement.
Director’s Profile:
Born and brought up in Shimla, Siddharth Chauhan is a self-taught and award-winning filmmaker. Driven by the need to create value, he makes most of his films in his hometown - Shimla and believes that world-class content can be created anywhere. Amar Colony is his debut feature film, which is the official selection for its world premiere in the competition section of Tallinn Black Nights Film Festival 2022, due to be held in November 2022. He is currently working on his second feature.
Producer’s Profile:
Nisheeth Kumar, the Chief Executive Officer (CEO) of Indie Film Collective (IFC), is the lead producer of Amar Colony. IFC is a film initiative, which aims to create and celebrate cinema by identifying and promoting emerging talent in cinema in the Indian and South Asian region, to begin with, but eventually globally. IFC’s first co-production is National Award-winning Director Gurvinder Singh’s film titled, Khanaur (The Bitter Chestnut). The film had its World Premiere at Busan International Film Festival in 2019; nominated for the Kim Jiseok Award, Indian Premiere at MAMI, 2019 and its European premiere at Rotterdam Film Festival, 2020.
Co-Producers Profile:
Arifur Rahman and Bijon Imtiaz are an award-winning filmmaking duo from Bangladesh who formed Goopy Bagha Productions Limited. Their debut feature film KINGDOM OF CLAY SUBJECTS premiered at Seattle International Film Festival. They’ve also produced LIVE FROM DHAKA, which premiered at Singapore International Film Festival, winning Best Director and Best Actor. It has also played at Rotterdam, Locarno and was recently picked up by French Sales company Stray Dogs. Their recently produced Afghan short film ROQAIA was part of the Venice International Film Festival’s competition section. Currently, they are developing several narrative feature films including PARADISE with Bijon as a writer-director and Arifur as producer which was an official selection at Berlinale International Film Festival’s co-production market. Arifur Rahman and Bijon Imtiaz are co-producers of Amar Colony.
About Tallinn Black Night Film Festival:
Started in 1997, the Tallinn Black Nights Film Festival has grown into one of the biggest film festivals in Northern Europe and busiest regional industry platforms. As of 2014, the festival holds the FIAPF accreditation for holding an international competition programme which puts the festival into the so-called A-category of film festivals, alongside other top 14 festivals in the world.
Tags : Amar colony Siddharth Chauhan