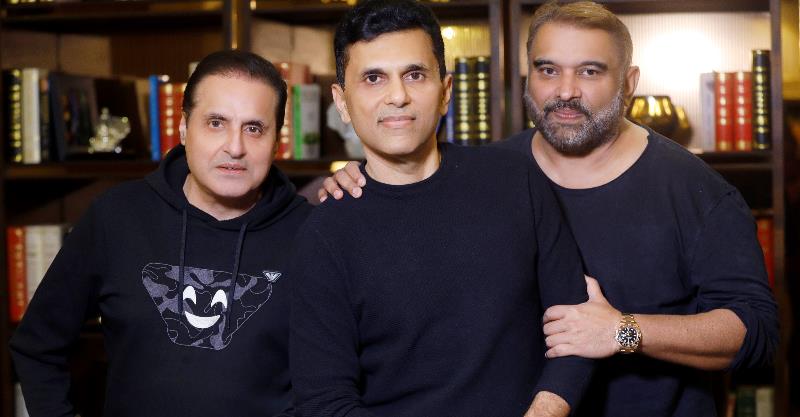 Anand Pandit, widely known as the man with a golden touch is all set to make 2023 exciting with news that will break the internet for sure. The veteran producer is joining hands with Eros International (NSE: EROSMEDIA), an Indian motion picture production and distribution company and Parag Sanghvi to produce sequels and re-make of two yesteryear blockbuster films that enjoy huge public recall and have great nostalgic value - Omkara, and Desi Boyz.
Sunil Lulla, Chairman, Eros Motion Pictures says, "We are excited to collaborate with Anand Bhai to revive the magic of these films that have remained indelible in our memories. We have often wondered what happened to our favourite cinematic characters and if their journey took them in surprising directions. These films will answer many such questions. We will work together to ensure that the essence of these classics remains untouched even as we infuse new energy and fresh vibrance in them.”
Says Anand Pandit, "Yes, it is true that I have collaborated with Eros International & Parag Sanghvi to make the sequels and re-make of two iconic films. Each of these two films - 'Omkara' and 'Desi Boyz' were trailblazers in their respective eras for their storytelling, star cast, and music. They still remain unforgettable for their command over their respective genres. They have a cult following for different reasons and it seemed like the perfect time to revisit these hits and take their stories forward for a new generation of viewers.
Parag Sanghvi says, "I am really thrilled to be a part of these amazing projects. It will be exciting to take the legacy of these classic hits forward. The partnership with Eros International is very strategic, as Eros Motion Pictures is best placed in India to maximize distribution and marketing including on digital platforms globally.”
Desi Boyz is a 2011 Bollywood romantic comedy directed by Rohit Dhawan, son of director David Dhawan. The film stared Akshay Kumar, John Abraham, Deepika Padukone and Chitrangada Singh in lead roles, while Sanjay Dutt featured in an extended cameo.
Omkara is a 2006 Indian crime drama film adapted from William Shakespeare's Othello, co-written and directed by Vishal Bhardwaj. It was headlined by Bollywood’s top stars including Ajay Devgn, Kareena Kapoor, Saif Ali Khan, Konkona Sen Sharma, Vivek Oberoi and Bipasha Basu.
Tags : Anand Pandit Motion Eros International Parag Sanghvi Desi Boyz