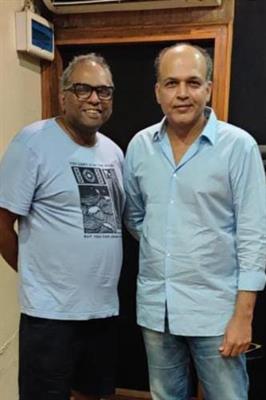 Award-winning music composer Daniel B George, who had received several accolades for Ayushmann Khurrana-starrer ‘Andhadhun’ has  teamed up with National Award-winning filmmaker Ashutosh Gowarikar for his next home production, Toolsidas Junior.
Daniel had composed the song 'Udd Chala' for Gowariker’s most sought-after production  ‘Toolsidas Junior’. Sung by the hit Bollywood singer Sachet Tandon, the song has already crossed more than million views within a few days.
‘Toolsidas Junior' is set to release in May but Daniel got already busy with his next project, Amit Sial-starrer Tikdam.
For Daniel, working with Gowariker has been an ‘enriching’ experience.
“Ashutosh Gowariker comes from a strong musical background. He is very encouraging and there was a very infectious enthusiasm while working for Toolsidas Junior with him,” said Daniel.
Directed by Mridul Mahendra Toolsidas Junior is set in Kolkata and stars Sanjay Dutt, late Rajiv Kapoor, Dalip Tahil and Varun Buddhadev.
The film explores the game of snooker for the first time on Indian Cinema. It also marks the return of Raj Kapoor’s son Rajiv Kapoor on the big screen.
Hailing from Hyderabad,  Daniel never had any formal education in music. He moved to Mumbai to work on Parineeta where he arranged all songs for Shantanu Moitra. Thereafter, he worked on films like Laage Raho Munnabhai, 3 Idiots, PK, Pink, Eklavya etc.
With Sriram Raghavan's Johnny Gaddar, Daniel got established as a name to reckon with in the music industry. Daniel and Sriram Raghavan’s association continued with films like Agent Vinod and the award winning & critically-acclaimed Andhadhun.
He also got recognition for his work in  critically-acclaimed films such as Agent Vinod, Bell Bottom, Parineeta, Helicopter Ela, Judgmental Hai Kya, Phobia and many more.
The multiple award-winning music composer has been nominated for his original score for the web series ‘Grahan’.

Presently, Daniel is upbeat  about Amit Sial-starrer Tikdam. Directed by Vivek Anchalia, Tikdam is a story of migration set in a small hill town. With lack of job opportunities, Amit Sial, who plays a father, decides to leave for a bigger city to earn a living. Daniel has composed six songs, two sung by Mohit Chauhan and done the background score as well for Tikdam. So, Daniel has his kitty full as of now.