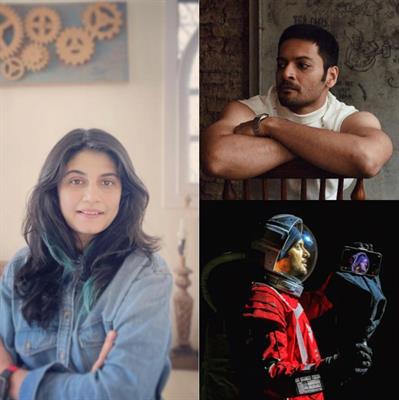 Many directors might overuse the phrase outside of the box, Arati Kadav lives by it and her works are proof of it. And recently she bagged the best director award at the Fantasia International Short Film Competition for her short film The Astronaut and his Parrot. It's a Sci-fi film starring Ali Fazal and was screened in the competition section of the festival.
The film is about a space explorer who, due to an accident, has been adrift in the void with a low supply of oxygen. In his final moments in space, he tries to desperately send messages to his daughter via signals but is received by a gaudy parrot in a fortune teller's stall.
Arati was pleasantly surprised when she received this news. “It feels so amazing to win this award and it is quite significant for an Indian sci-fi movie. I am really grateful to my wonderful team, friends and everyone who made this film with me. I am thankful to the amazing Ali Fazal, who agreed to hang in there with me in space. Our goal has always been to make a film in the depths of space and the whole team’s passion can be seen in the movie,” says Arati.
Arati is based out of Mumbai, grew up in Nagpur and trained as a computer science engineer, working as a software developer in the US before deciding to switch professions. She juggled various sides  by working in advertising and music promos and six short films. Some of her work includes minute-long Time Machine (2017), Her debut feature, Cargo (2019), is a science fiction drama. Her name was mentioned by BAFTA for Breakthrough India participants for 2022. The festival, which is being held till 3 August, is known as the world's leading genre-specific film festival and it will also screen at Sci-Fi London Film Festival.
Tags : Arati Kadav Ali Fazal