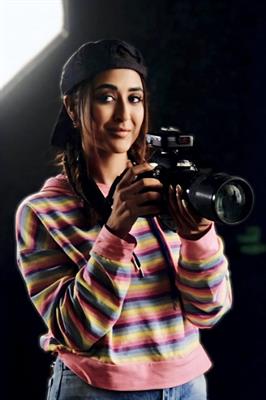 Ariah Agarwal is playing the lead role in Adi Suri Ki Dulhania. The actress plays the role of a photographer in the rom-com series on Digiflix, and she worked hard to get into the skin of her character.

Speaking about her role in the series, Ariah says, "I play the character of Mansi, a no-nonsense girl who is independent and straight forward. She is a professional photographer. She is fun-loving, takes it easy on life. No one can cross her, she dislikes spoiled brats. She shoots for shows, for campaigns, and she has made a name for herself. She also wants to do a photography course. These stills are BTS from her photography project for a show.  You can see she foesn't care about her looks. She dresses like a tomboy and is just committed to her work."

Playing a photographer on screen was not an easy job and Ariah had a lot of prep to do to look convincing. Talking about her preparation for this role, Ariah says, "I prepped hard by noticing photographers, I did some photo shoots before the show. I was noticing how the photographers do their work; how they check after clicking a picture, fix things. I learnt how to use different lenses. Not on a professional level, but I Iearnt a lot about different cameras. The one I used in the show was quite heavy. So I kept saying the spot dada how is yours so light, mine is so heavy. So I had a lot of prep to do. It was important to look convincing. So even after the shots, I would carry the camera around and click pictures on the sets."

Ariah Agarwal made her debut with the show Kya Haal, Mr Panchaal? in the year 2017. She has also worked in popular television shows Kasautii Zindagii Kay and Prem Bandhan. The multi-talented actress has been credited in various Bollywood films, TV Serials, web series and commercial advertisements as a costume designer. Ariah has also appeared in multiple advertisements, brand photoshoots, and also walked the ramps for designers.