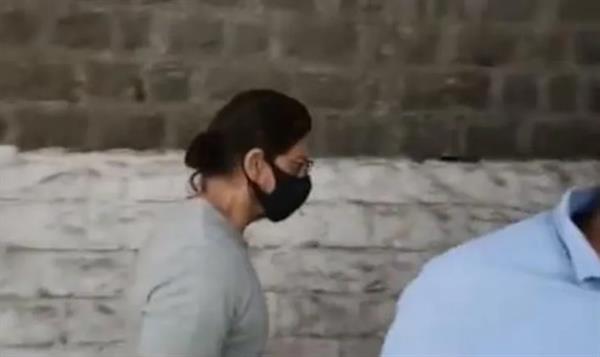 Bombay high court will hear Aryan Khan‘s bail plea on October 26, his lawyers were quoted as saying by ANI. Earlier, it was said that his case will likely to be mentioned before Justice NW Sambre today, seeking urgent hearing.

Physical meetings will be allowed from today, days after being banned due to Covid protocol. Thursday is Aryan’s 18th day in jail since arrest.

Aryan Khan is in custody for 18 days since his arrest by NCB in the Mumbai cruise drug bust case.

Reportedly the father and son had spoken on a video call early.

Aryan Khan is allowed a money order of Rs 4500 per month to purchase water and food from the prison's canteen.

Shah Rukh Khan visited son Aryan Khan in Mumbai's Arthur Road jail ahead of his bail hearing in Bombay High Court. This was the first time that SRK visited son post his arrest in a drugs case.

Aryan will seek bail in the High Court today after a special court in Mumbai yesterday rejected his bail plea in drugs case.

As per reports, the case is likely to be mentioned today at 10.30am before Justice N W Sambre seeking urgent hearing.

Aryan Khan's bail plea has been rejected over three times. The 23-year-old is currently lodged in Mumbai's Arthur Road jail in judicial custody. While Dhamecha is lodged at the Byculla women's prison in the city.

What court said on Wednesday while rejecting bail

The court in its order said that Aryan knew that his friend and co-accused Merchant was in possession of drugs, and hence there was “conscious possession” even though the NCB had not found any drugs on Aryan himself.

“Considering the prima facie involvement of the applicants/accused No 1 to 3 (Aryan Khan, Merchant and Dhamecha) in commission of grave and serious offence, this is not a fit case for granting bail,” the judge said in the order while denying bail to accused. The voluntary statements and case papers of Aryan and Arbaaz revealed that they possessed drugs for consumption and enjoyment, the court noted further.

In Aryan's WhatsApp chats, there is reference to "bulk quantity and hard drugs" and "there is prima facie material showing that accused No 1 was in contact with persons dealing in prohibited narcotic substances," the order said.

Aryan, Merchant and Dhamecha, among others, were detained on October 2 by the NCB during a raid on a cruise ship off Mumbai coast on its way to Goa.