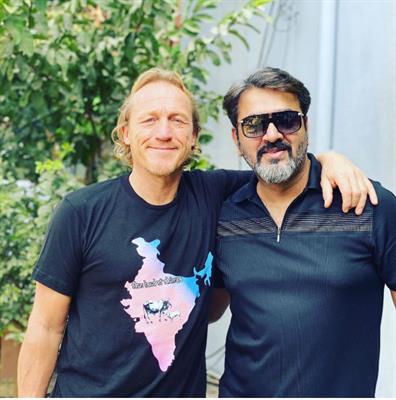 Aryeman Ramsay, son of Late Keshu Ramsay is all set with his first ever documentary called THE LAND OF AHIMSA. The documentary brings you on a journey to understanding the origins of Ahimsa with experts on environment, nutrition, spirituality and advocacy to illustrate the importance of “Ahimsa” in action in India with the intention that this will resonate across the globe.
Aryeman came to direct The Land Of Ahimsa when a family friend Dolly Ahuja, the producer of this documentary approached him. It was the subject and Jerome Flynn (Game Of Thrones fame) that excited him to say a yes to this project. Aryeman shares his experiences with us while shooting for this lovely documentary. He says, “This is my first documentary that I have directed. Dolly Ahuja and Mayur Ahuja happen to be our family friends and they wanted me to direct this film.
Later I got to know the executive producer is for this none other than Jerome Flynn, the actor from Game Of Thrones. So was really excited.” He further adds talking about the The Land Of Ahimsa, “This is a documentary shot like a film. There is a very big question in this film as the film is titled the Land of Ahimsa. The question is, ‘Is India the land of Ahimsa’? The experience directing this film has been crazy. My 10 year old son turned vegetarian after attending the shoot for just 2 days”, he smiles.
On being associated with The Land Of Ahimsa and Aryeman Ramsay, Jerome Flynn proudly says, “After watching this documentary I am sure there will be a beautiful change that our hearts are longing for and we will surely create an amazing world for our future generations”.
The Land Of Ahimsa is Directed and Produced by Aryeman and Dolly Vyas and Mayur Ahuja. Executive producers are by Dr. Sailesh Rao (Cowspiracy, What the Health and Prayer for Compassion) and Jerome Flynn (Game of Thrones).
The documentary features Dr. Sailesh Rao (Founder of Climate Healers), Philip Wollen, Keegan Kuhn, Dr. Neal Barnard, Arvind, Jane Velez-Mitchell, Dr. Rupa Shah, Dr. Will Tuttle, Abhishek Sinha, Dr. Munish and Dr. Bandana Chawla, Darshana Muzumdar, Jim Meyers, Dr. Nandita Shah, Dr. Deepak Kotecha, Kuntal Joisher, Dr. Sulekh Jain, Maneka Gandhi, Jerome Flynn, and many others.
The trailer will be out tomorrow, 12th August, 2022. Stay tuned in!
Tags : Aryeman Ramsay Game OF Thrones Jerome Flynn