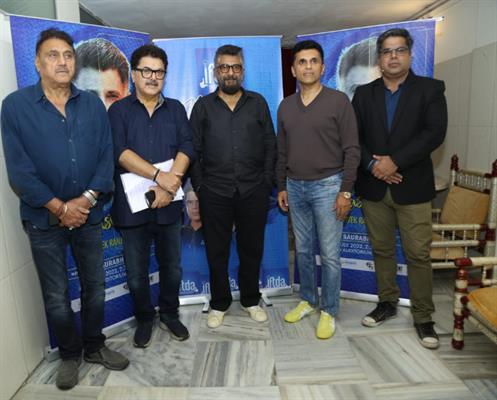 Over the years Indian Film and Television Directors Association (IFTDA) has been hosting  Master Class with top filmmakers from Indian film industry where the achievers not only come to talk about their hard earned success and  achievements but their main focuss is on  discussing the process of their individual style of  filmmaking and sharing their life experiences too.
The illustrious list of filmmakers and personalities invited by IFTDA for Master Class includes Gulzar, RajKumar Hirani, Sudhir Mishra, Shoojit Sircar, Imtiaz Ali, Mani Ratnam, Zoya Akhtar, Rohit Shetty, Farah Khan, casting director and filmmaker Mukesh Chhabra etc. IFTDA always believed in inviting best talents for conducting Master Class. And now the name of Kashmir Files director Vivek Agnihotri has been added to this illustrious list of filmmakers as another special guest of Master Class.
After hosting many prolific filmmakers from the industry, IFTDA President Ashoke Pandit  along with his entire managing committee is super excited to invite current toast of the B-town Vivek Agnihotri to participate in 22nd Master Class which will be held in the Iskon Auditorium In Juhu, Mumbai on 20th July at 2.30 pm. Notably, Saurabh Verma, who himself is a filmmaker, will be hosting the Master Class and interacting with the special guest.
Vivek Agnihotri is just not a director but a prolific writer, producer and a public speaker too. As a speaker he is being  regularly invited world over to voice his opinions on various issues pertaining to India and its problems. Vivek Agnihotri is also known as an author of books titled 'Urban Naxal' and 'Buddha In A Traffic Jam'.
His film Taskent Files (2019) based on the mysterious death of Ex-Prime Minister Of India Lal Bahadur Shashtri went on to win two national awards. His recently released super successful film Kashmir Files based on the exodus of Kashmir Pandits went on to shatter and rewrite many box office records. It is also one of the most talked about and widely discussed film in the history of Indian cinema. Kashmir Files evoked many debates across the world and for the first time world took notice of the plight of Kashmir Pandits and the atrocities they were subjected to.
On extending the invitation to a self-made filmmaker Vivek Agnihotri, President of IFTDA Ashoke Pandit said, "There is no doubt whatever Vivek Agnihotri has achieved today it is because of his hard work, his passion for cinema and his dedication to make films after films with lot of conviction. My dear friend Vivek has time and again shown that if you know your craft well and if you are determined to make films you believe in, you are surely going to achieve greater heights in life. We in IFDTA are eagerly waiting to know more about Vivek's three decade long journey in the industry."
Interestingly, during the Master Class session with Vivek Agnihotri, the winners of short film contest held by IFTDA will be facilitated by chief guest itself.
Tags : Ashoke Pandit Kashmir Files Vivek Agnihotri Saurabh Verma