At the Uunchai of her career, here is Neena Gupta’s first look from the highly anticipated Rajshri Film – Uunchai! 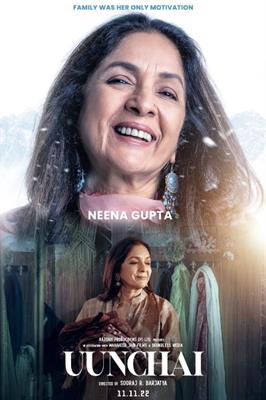 Latest superstar to join the unravel of the cast of Uunchai is none other than the amazing Neena Gupta! In the best phase of her career, Neena is outshining everyone with her choice of meaty roles and their fitting portrayal.
The actress who made a historic comeback in 2018’s massive hit family entertainment – Badhaai Ho, has only had an upward career graph trajectory from there on. Another heavyweight film in her kitty, Uunchai is slated to release on 11.11.22. Her Badhaai Ho co-star and real life dear friend, Gajraj Rao took to his social media handles today morning to share Neena’s character poster from Uunchai with her exclusive first look!

Veteran after veteran, Uunchai’s star-studded ensemble is getting bigger and shiner day after day. This unique campaign of having the cast’s special friends unveil their first looks for the film has gotten the industry together to celebrate the film Uunchai which in itself is a celebration of friendship! After Amitabh Bachchan, Anupam Kher, Boman Irani and Sarika, the next star to be unveiled today was Neena Gupta.
Playing Boman Irani’s wife in the film, Neena is introduced as Shabina from Uunchai. Her character poster stands out from the rest of the character posters released by the makers, as this is the first one where the character is not seen in snow gear. Neena’s poster is here remind the audience of a quintessential Rajshri film feel.
Her poster is divided in two halves, where one half shows her near a wardrobe full of everyday clothes, she seems to be in middle of household chores. The other half shows a carefree smile with a mild twinkle in her eyes, as her character celebrates the constitution of family with her exclusive tagline – Family Was Her Only Motivation.

Uunchai has a prism of emotions to offer – friendship, redemption and family have taken front seats in forming the emotional palate of the film.  With 5 posters of the cast out today, the curious question for tomorrow is, is Parineeti Chopra’s look next to be revealed? The industry’s eyes are now set on the 18th of October, when Uunchai’s trailer is expected to be released.
A film mounted on grandeur and scale, Uunchai is headlined by Amitabh Bachchan, Anupam Kher, Boman Irani, Sarika, Neena Gupta and Parineeti Chopra, with special performances by Danny Denzongpa and Nafisa Ali Sodhi. Directed by Sooraj R. Barjatya, produced by his home production, Rajshri Productions in association with Mahaveer Jain Films and Boundless Media, Uunchai will be in a theater near you on 11.11.22

This one is to dreaming big and making it happen. My first with Rajshri Productions. Meet me as Shabina Siddiqui in a theatre near you on 11.11.22. A film by Sooraj Barjatya, #Uunchai is special.