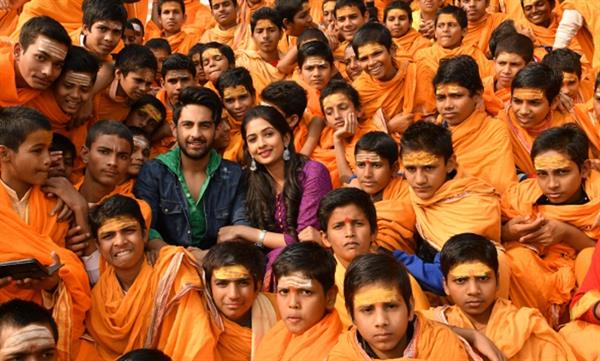 The much awaited Zaid Khan and Sonal Monteiro’s Banaras’s motion poster is out now.

The makers of the Zaid Khan and Sonal Monteiro’s starrer Banaras have released its first motion poster.

Zaid Khan is making his debut with this film directed by Jayathirtha.

Shot in the picturesque locations of Banaras, the captures its divine beauty - ghats, temples and the holy Ganges. Zaid and Sonal look elegant in their ivory-gold outfits and blend beautifully with the poster's warm and pleasing design.

Directed by Jayathirtha, Banaras is said to be a first of its kind and will release in five different languages namely, Hindi, Kannada, Tamil, Telugu and Malayalam.

Banaras will release next year in 2022.

Made under the production of NK Productions house, Banaras is produced by Tilakraj Ballal, co-produced by Muzammil Ahmad Khan, story ,screenplay and direction is done by Jayathirtha.

B Ajaneesh Loknath has given the music, cinematography by Advaitha Gurumurty and choreography by Jayathirtha and A Harsh. The film will be shot at Varanasi, Bangalore, Mysore and Goa.

Along with Zaid Khan and Sonal Monterio, the movie will also feature Sujay Shastry, Devaraj, Achyuth Kumar and Barkath Ali in pivotal roles.

Zaid Khan is excited with his debut film Banaras.

He said, “First is always special. Banaras has given depth to my character. The heritage city is beautiful in all aspects and the director Jayathirtha has extracted out the talent from us and shown on the silver screen. I hope the audience will appreciate the love story of Siddharth and Dani.”

Sonal Monteiro, the leading lady of Banaras said “it is an emotional love story. The film also depicts their love for each other and how it grows while exploring the city of Banaras.”

On working with Zaid Khan, she said, “ Zaid is an energetic and hardworking actor. It doesn't seem it's his debut film. He has given his best. I hope the audience will love our pair”.