After the success of ‘Bhool Bhulaiyaa 2’, T-Series and Diamond Comics are set to make us laugh with ‘Rooh Baba ki Bhool Bhulaiyaa 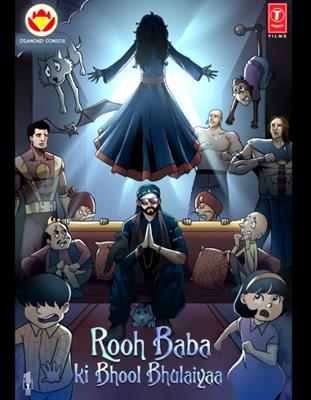 Rooh Baba ki Bhool Bhulaiyaa comics is based on Kartik Aaryan’s character ‘Rooh Baba’ and is sure to leave us amazed
Following the massive success of Bollywood’s recent blockbuster ‘Bhool Bhulaiyaa 2’ starring Kartik Aaryan in the lead role, T-Series along with Diamond Comics is soon to publish ‘Rooh Baba ki Bhool Bhulaiyaa’ a comic based on Kartik’s iconic character ‘Rooh Baba.’
Being a family entertainer, ‘Bhool Bhulaiyaa 2’ was very well received by families especially children, due to the actor’s enormous kids fan base. The horror comedy has particularly fascinated children amongst the colossal audience that cherished the film. Needless to say, Kartik Aryan’s problem solving character ‘Rooh Baba’ garnered ample of love and giggles from the fans and is now trailed by a super amusing comic which is surely to win hearts.
On this exclusive partnership, Bhushan Kumar, Managing Director and Chairman, T-Series said, “We’re still celebrating the film’s success and thanking the audience for the abundance of love that they have showered on the film. This special collaboration with Diamond Comics is another way of adding on to this celebration. For every film, the promotional and marketing phase is very important and is something that impacts the accomplishment of the film, and that is what we had in mind for Bhool Bhulaiyaa 2. I’m extremely joyed and looking forward to this super fun comic.’
Speaking about the Comic, Kartik Aaryan said, “I’m very excited about this because this is the first time that I’ll have my own comic book character which is based on my most recent and loved film Bhool Bhulaiyaa 2. This comic is another addition to the success of the film and I’m really looking forward to it.”
Anshul Verma, Diamond Comics said, “Bhool Bhulaiyaa 2 is a film that is loved by everyone who has watched it, especially the younger audience. This comic is inspired and based on Rooh Baba, a character that received admirations from across the globe. We couldn’t think of a better character to create a fun masterpiece with other than Rooh Baba. I think just like the film, ‘Rooh Baba ki Bhool Bhulaiyaa’ is also going to smother everyone with ample of snickers and joy. Also, any association with T-Series and Bhushan Kumar is something that works like a cherry on the cake for a project.”
Tags : Bhool Bhulaiyaa 2’ T-Series kartik aaryan kiara advani