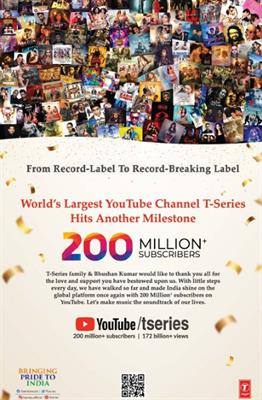 Bhushan Kumar’s T-Series the leader has set an example again.

India’s largest music label, and movie studio, T-Series has crossed the milestone of 200 Million subscribers on YouTube, becoming the first-ever channel in the world to do so.

As per repots, T-Series has a vast range of 29 channels across languages and genres, the total subscriber base for the T-Series network is more than 383 million with over 718 billion views.

Bhushan Kumar, Chairman & Managing Director of T-Series has been quoted saying. “We are thrilled to be the premier Indian YouTube channel to hit such a massive subscriber base. This is indeed a proud moment for all Indians given that a homegrown Indian channel has become the first channel to cross a colossal 200 Million Subscribers mark on YouTube”.