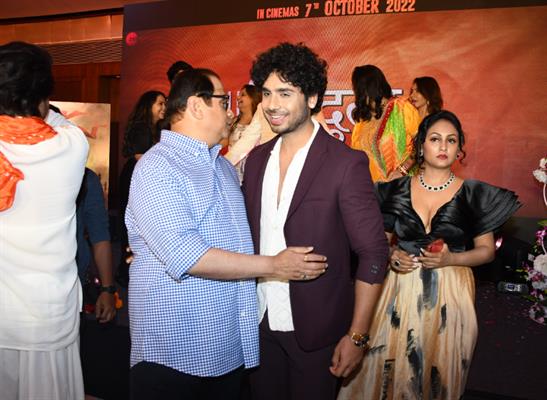 Bollywood has always welcomed true talents. A testimony to this could be superstars like Shah Rukh Khan and Nawazuddin Siddiqui. And the same spirit was visible at the music launch of Bollywood's hottest new find Lakkshey Dedha's debut film Hindutva. Iconic personalities such as Subhash Ghai, Ramesh Taurani, Satish Kaushik and Anup Jalota turned up at music launch of the Karan Razdan directorial.
Gushing with excitement Lakkshey said, "I am truly touched by their gesture. What more could a newcomer ask for. Such love for a complete outsider speaks volumes!" Lakkshey was seen spending some time chatting with Taurani, who has produced blockbusters like the Salman Khan starrer Race franchise.
In the meantime the film has already caught the attention of the nation thanks to its name. Needless to say Lakkshey can't be less thrilled. "Our film is essentially about spreading love and brotherhood. It uses the backdrop of student politics," the former Mr India reveals.
Hindutva also stars Ashiesh Sharma and, Sonarika Bhadoria. The film is slated to hit the screens on October 7, 2022.
Tags : Shah Rukh Khan nawazuddin siddiqui