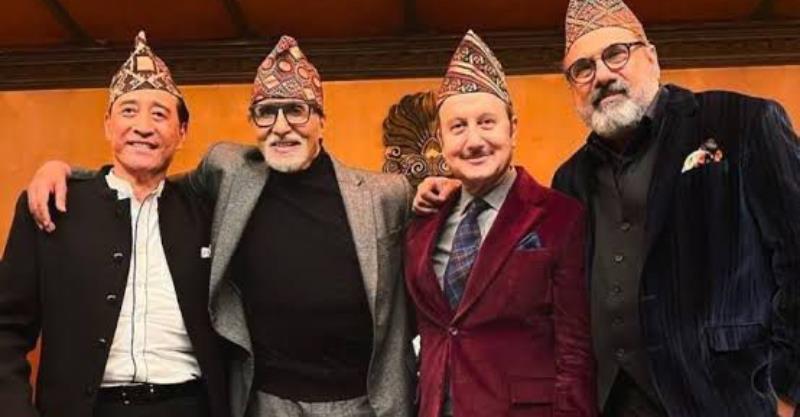 Boman Irani, who has always outdone himself with each performance and ensures that the audience takes a part of his character back home, is getting ready for the release of his upcoming Pan India release 'Uunchai,' starring Amitabh Bachchan, Anupam Kher, Danny Denzongpa, Neena Gupta, Sarika, and Parineeti Chopra. In a recent interview, he explained how his close friend and colleague Anupam Kher pushed him to accept this role, even though he had initially declined due to the pandemic's peak and certain personal and scheduling conflicts with other projects.
This movie, which has some of the most prominent names in Hindi cinema, is poised to break all records. Directed by Sooraj Barjatya and produced by Rajshri Productions, is united by a strong concept of friendship, and Boman Irani, Amitabh Bachchan, and Anupam Kher are the ideal examples to portray this lovely bond on the big screens.
Giving us some insights, Boman said, "I had to decline the role when Sooraj Ji first approached me for this movie due to personal issues and work obligations. Then, one fine day, I received a call in the evening from Mr. Anupam Kher. Before I could say hello, he began ranting at me. Anupam just heard the script read by Sooraj Sir and was so moved by it that he was curious to find out who was in it. He made the call as soon as he heard I had rejected the movie.
I knew that behind all of the scolding was pure love, friendship, and his care for me. He genuinely wanted me to do this film because, according to him, I would be a part of history. He was certain that with this cast, 'Uunchai' would smash records. And he was correct; I had the best time of my life while working on this picture; it was a spiritual experience that I will cherish for the rest of my life”
While speaking further about his director Sooraj Barjatya, Boman added, "I really appreciate that Sooraj Ji wanted an actor who would do justice to Javed's (Boman's role) character. The fact that he also mentioned that it was his dream to work with this star cast calling us his dream team, leaves me feeling extremely overwhelmed."
On the work front, he will next be seen in Raj Kumar Hirani’s Shah Rukh Khan starrer film ‘Dunki.’
Tags : Boman Irani Uunchai sooraj barjatya Amitabh Bachchan Anupam Kher