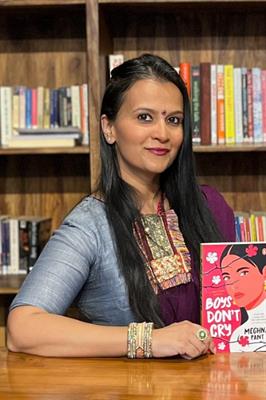 A premium name in the space of digital entertainment with the longest-running Indian Netflix original under its banner, Dice Media is known for its strong portrayal of relationship dramas. ‘Boys Don’t Cry’, a gut-wrenching novel based on (mostly) a true story, about physical, mental, and emotional abuse in a marriage of a couple that is urban, progressive, and really just like any of us.

Published by Penguin Random House, ‘Boys Don’t Cry’ was just released in January 2022 and already has praises pouring in from reviewers and audiences alike. The book is a bestseller on Amazon and across various bookstores in India, including Crossword. Meghna Pant is an award-winning author and journalist with 7 books to her credit including novels, collection of short stories, and non-fiction writing. Meghna announced the partnership with Dice Media at the Jaipur Lit Fest on March 10th, and the book was also acclaimed the #2 best-selling novel at the fest.

Meghna Pant, the Author and Screenplay Writer of ‘Boys Don’t Cry’ commented saying, “I am delighted to be partnering with Pocket Aces’ Dice Media for the film adaptation of my bestselling novel ‘Boys Don’t Cry’. Not only do our sensibilities match, but they’ve also been immensely passionate, enthusiastic and supportive. We kickstarted our writer’s room on Women’s Day, an auspicious beginning. ‘Boys Don’t Cry’ is more than a book… It is the story of 15 years of my life that took me 8 years to gather the courage to write. It’s a rule book that guides girls on matters of the heart and head; It’s a peek into the closed doors of a modern Indian marriage; It’s a dialogue on mental health that every family should have. I look forward to co-creating a film that will take the conversation forward, while being entertaining, enthralling and gripping. You will not be the same person after watching it.”

Commenting on this partnership, Aditi Shrivastava, Co-founder, CEO and Producer at Pocket Aces says, “I am thrilled to partner with Meghna and announce ‘Boys Don’t Cry’ as Dice Media’s first feature film project. When I first came across the book, it was instantly clear to me that this was a story that Dice needed to tell given our depth in the relationship drama space. This (true) story is unique compared to the other movies made on domestic abuse because here, abuse is not black and white - there are several emotional and mental nuances that are screaming to be explored. Nobody is getting beaten up and the girl is not an abla nari - she is a modern, working, financially independent woman in a marriage that looks as normal and modern as any other. This is not “someone else’s” story anymore - I’m sure that every single person who has been in a relationship will relate hard to it at some level. We have an A-class creative team working on creating a fast-paced engaging film, and we can’t wait to get it to your nearest screens soon.”

Dice Media has been working on bringing several strong IPs to Indian screens - they recently announced working on the remake of an Emmy-award winning telenovela, and also a partnership with South Korea’s JTBC Studios for the Indian adaptation of its popular K-drama - Something In The Rain.