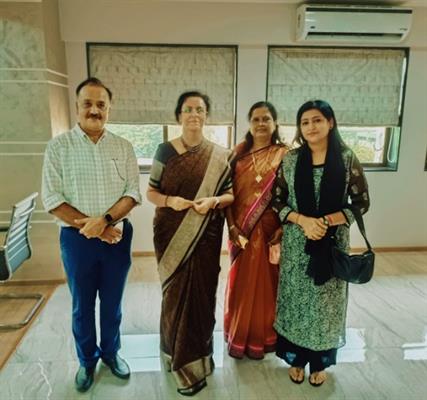 In a bid to discuss concerns regarding changes to regulations in the wake of the third wave of COVID-19 in India, and to spell out the several challenges endured by the actors, CINTAA dignitaries including Joint Secretary Sanjay Bhatia, CEO Satish Vasan and Executive Committee Member Hetal Parmar met with Addl. Commissioner of Labour Shirin S Lokhande and Secretary madam labour dept. Smt Vinita Ved Singhal -IAS Principal Secretary at Kaamgar Bhavan, BKC.

The major concerns which the Honourable Labour Commissioner took note of where the following:

• Children should not work for more than 8 hours a day and there should be appropriate guidelines.

• Contract copies of the actors shall be given to the actors at the earliest.

• Women and Child actors shall be provided pickup and drop from their homes in case of odd hours of shooting shifts like very early call time and late-night pack up.

• Request for a uniform contract and include the broadcasters as a party to the contract.

• Attention of the Additional Commissioner being drawn to the payment delays/defaults by producers.

• Reluctance by producers to hand over copy of the talent agreement to the artiste was put forth and she categorically emphasized that both parties to the agreement should have a copy of the same.

A written representation was given to the commissioner and all in all an eventful meeting to ensure the voice of actors is heard.