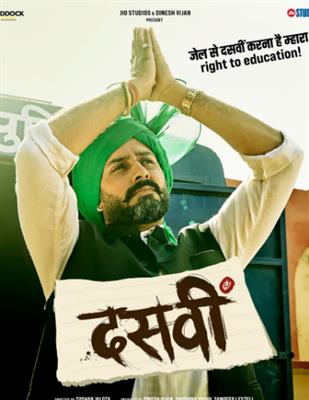 Does art imitate life, or does life imitate art? Abhishek Bachchan’s Dasvi will keep us guessing! The film has received massive applause from around the world, with many praising the inspiring story of a corrupt politician who falls in love with education while in jail and finally aces the 10th grade.
The Dasvi mania doesn’t end there though! Looks like this motivational tale left a lasting impact on some special fans. The Tushar Jalota directorial was shot on location at Agra Central jail, with the film also being screened for the inmates at the premises. Some inmates took movie’s message to heart, as they too decided to buck up and embrace the magic of education. No good deed goes unpunished, as 12 of them have now passed the boards with flying colours. While 9 of the prisoners passed the 10th grade exam, 3 passed the intermediate 12th grade test.
Commending their wonderful achievement, lead star Abhishek Bachchan says, “It feels wonderful when you see the positive effect a film you’ve been a part of make in real life. Credit has to go to the students and to my director, Tushar. His belief in the film and the story he wanted to tell. This news is bigger than any award or accolade we as a team could have received”.
Talking about the impact of the film, producer Dinesh Vijan adds, “Films can make a difference. I have always believed in backing good content which can be made into mainstream films. Dasvi was another opportunity for me to do just that. And I’m really happy and proud that it has managed to touch people’s lives and impacted them in a positive way.”
Sharing his elation on the news, director Tushar Jalota says, “I’m really happy to hear such heart warming news. With Dasvi, we always wanted to make a mainstream, entertaining film where we spoke about the importance of education. But the most important thing was that we all had very honest intentions while making it. When words are said from the heart, they will enter another heart. The fact that we could manage to inspire and impact so many lives for the good has truly made it a very fulfilling experience.”
With recent news revealing that not just Agra, but 163 inmates across Uttar Pradesh clearing board exams, the film may have done much more than just entertain audiences! A wholesome blend of earnest intentions, an important message and a great script, Dasvi produced by Jio Studios and Maddock Films seems to be doing wonders even months after its release.
Tags : Dasvi Abhishek Bachchan