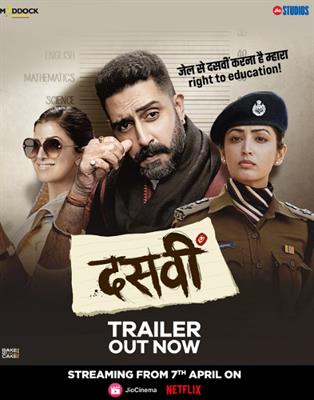 Hasega India, toh padhega India_! Well, if the “Dasvi” trailer is anything to go by, that’s how you do it. The Abhishek Bachchan starrer is garnering a lot of buzz since announcement, and the official trailer proves why it is one of the most exciting films of the year.

The social comedy tells the story of Ganga Ram Chaudhary, an anpadh, corrupt and dil se desi politician who finds a nayi chunauti in prison: education.

Now, passing dasvi kaksha is his next manzil! With a quirky biwi by his side and a rough-tough jailor on his trail, what happens to this natkhat neta forms the crux of the plot.

The trailer sees Abhishek have a blast in his raw and rustic Jaat avatar.

Yami Gautam is powerful and piercing in the role of a dhaakad IPS officer, while Nimrat Kaur is a delightful surprise as the feisty wife with a taste for her hubby’s beloved kursi.

Talking about the trailer, producer Dinesh Vijan says, “The trailer is a sneak peek into the lovely world of Dasvi. Maddock has always backed content based cinema, and Dasvi is yet another attempt at providing a wholesome family watch that entertains and enlightens”.

On the performances of his lead stars, Dinesh adds, “Abhishek, Yami and Nimrat have knocked it out of the park. Audiences will fall in love with all three of them by the end.”

Director Tushar Jalota echoes similar thoughts, as he says, “Ever since we conceived Dasvi, it was clear we have a unique film in hand, one that tickles people’s funny bones and makes them realize there is magic in knowledge. I can’t wait for audiences to witness this special tale”.

Featuring many seeti maar dialogues as well as desi cool  music, the trailer perfectly captures the mazedaar vibe of the film. Looks like the janta has a rollicking ride to relish this April!