Why Debina Bonnerjee is a storm on internet? 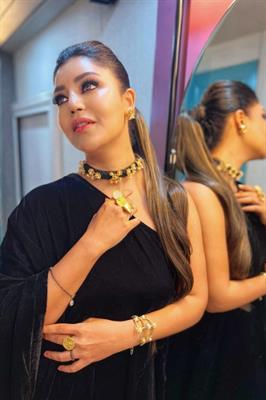 Recently actress and Influencer Debina Bonnerjee entered Bigg Boss 15 as a panelist and fans have flooded her with comments and dms full of love and appreciation for stating her viewpoint so well.

The Bing Beauty's passionate stance has gone viral ever since the episode was aired.

Debina was in Bigg Boss as the panelist to support her friend Rashami Desai. She also extended her support for Pratik whom she doesn't know personally but enjoyed his game while watching Bigg Boss 15.

She stood for the way they are conducting themselves as both are equally strong and playing fair. The actress fearlessly put forward her opinion keeping dignity and self respect in place without getting in any arguments with the other panelists.

She supported and gave direction to the people whose game she liked and guided them in a right way without being rude.

Fans all over are praising Debina for how she articulated her point of view and gracefully maintained her voice, preventing other panelists from interfering.

Not only Debina Bonnerjee's  fans but all the avid Bigg Boss viewers across the globe send her messages of support and pleas to enter the Bigg Boss house! One user commented, 'Please come in next season. You got a voice with tightness,' other user wrote, 'Loved how you voice your opinion.

Debina expressed her feelings taking to her instagram and she wrote, "Now I know you loved me in #biggboss last night.

Interestingly people have always seen me voicing dialogues.. people had not seen me voice my opinion. This was the first of its kind and I'm glad you found them to the point also holding on to my dignity and with a lot of grace. That's the real me for you...