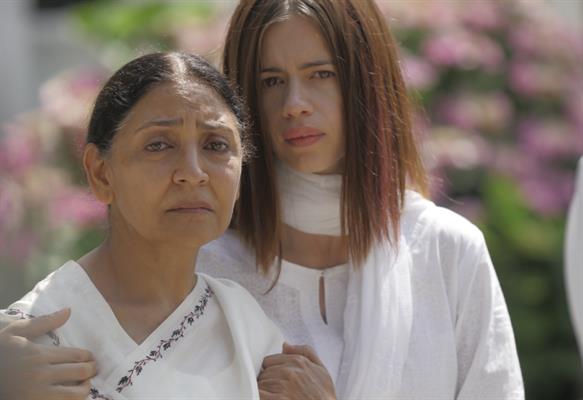 Goldfish, an English language feature film directed by Pushan Kripalani starring veteran actress Deepti Naval and Kalki Koechlin will have its European Premiere at 30th Raindance Film Festival which is BAFTA and OSCAR qualifying festival. It is to be held from 26th October – 5th November 2022 at London.
The film which is selected in the ‘Homegrown’ category is nominated for the ‘Best UK Film’ in the festival.
Apart from Deepti Naval and Kalki who play the lead roles of mother and daughter, the film also stars the prolific actors Rajit Kapur, Gordon Warnecke (lead in ‘My Beautiful Laundrette), and Bharti Patel (Featured in BBC series Doctors) in pivotal roles.
The film had its world premiere at the 27th Busan International Film Festival, 2022
Goldfish deals with memory and identity. Anamika, the child of a mixed marriage, returns home to her estranged mother Sadhana because she is suffering from the onset of dementia. Ana returns to a neighbourhood she barely remembers, to a woman who sometimes doesn’t remember her.
Set in London Goldfish is a UK production and is produced by Amit Saxena’s Splendid Films (USA) and executive produced by Pooja Chauhan. The film had its market screening at Marche Du Film (2022) and was part of the First Cut Plus lab in association with Karlovy Vary Film Festival.
Actor Deepti Naval said, “It is a wonderful news and feels great that the movie is making the right kind of noise. This movie holds a special place for me as I've personally dealt with dementia. It is a very relatable story and so it’s good to know that there is a world audience for such stories at festivals such as Raindance”.
Excited about the premiere, Director Pushan Kripalani said, “I’m delighted to learn about the film’s nomination at Raindance. It is very gratifying that the long journey and the efforts of the cast and crew are acknowledged and recognised. Hope to see everyone in person again, very soon. It is true we must look forward and on to other things, but moments like these help us pause for a minute and say to one another, look at what we did. It’s a wonderful feeling”
Actor Kalki Koechlin said, “Very thrilled that Goldfish is selected in competition for best UK film at Raindance Festival. this is a special one for most of the cast and crew who are from UK, it feels like the film has come full circle from last july when we shot it in London”.
Amit Saxena, Director of Splendid Films and Film Producer said, “I am overjoyed to make our UK premiere at the Raindance Film Festival. It’s been a beautiful journey collaborating with such wonderful talent and see it going places”.
Pooja Chauhan, Film’s Executive Producer said, “Goldfish, from the offset, explores the concept to identify. So it is rather poetic that Raindance has nominated it for Best UK film. This film is a creation by people of many different ethnicities and from various walks of life - all brought together by one thing alone - their love for good cinema. We are honoured to be in this category.”
Tags : Deepti Naval Kalki Koechlin GOLDFISH