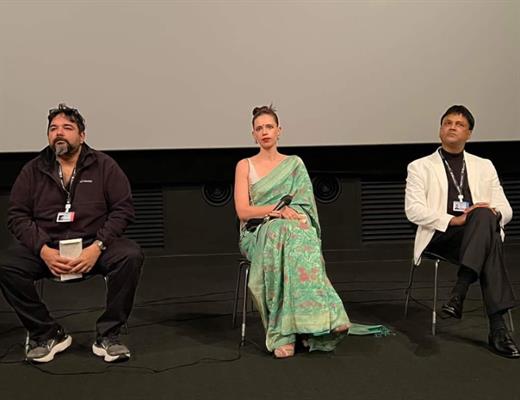 Goldfish, an English-language-feature directed by Pushan Kripalani starring veteran actress Deepti Naval and Kalki Koechlin received a heartening response at its World Premiere at the 27th Busan International Film Festival held from 5th- 14th October in South Korea.
The director Pushan Kripalani, lead actress Kalki Koechlin and producer Amit Saxena were present at the premiere screening.
Apart from Deepti Naval and Kalki Koechlin who play the lead roles of mother and daughter, the film also stars the prolific actors Rajit Kapur, Gordon Warnecke (lead in ‘My Beautiful Laundrette), and Bharti Patel (Featured in BBC series Doctors) in pivotal roles.
Goldfish deals with memory and identity. Anamika, the child of a mixed marriage, returns home to her estranged mother Sadhana because she is suffering from the onset of dementia. Ana returns to a neighborhood she barely remembers, to a woman who sometimes doesn’t remember her.
The film will have its European Premiere at BAFTA and OSCAR qualifying Raindance Film Festival to be held from 26 October–5 November 2022.The film which is selected in the ‘Homegrown’ category is nominated for the ‘Best UK Film’ in the festival.
Set in London Goldfish is a UK production and is produced by Amit Saxena’s Splendid Films (USA) and executive produced by Pooja Chauhan. The film had its market screening at Marche Du Film (2022) and was part of the First Cut Plus lab in association with Karlovy Vary Film Festival.
Excited about the premiere, Director Pushan Kripalani said, "The audience were wonderful. They watched the film with attention and the questions that came to us were thoughtful and engaging. The question and answer session could have gone on for twice as long. I have a lot of respect and love for such careful and insightful viewers of cinema”.
Actor Kalki Koechlin said, “It feels great to see the audience engaged in a movie that’s been labour of love. And the question answer round went well as we got some really insightful and meaningful questions leading to a wonderful exchange of thoughts. It’s a joy to see such evolved global audience and get an opportunity to engage with them”
Amit Saxena, Director of Splendid Films and Film Producer said, “It was almost a full house with an amazing audience. The questions asked by the audience showed their deep understanding of cinema. We could not have asked for a better platform for our world premiere."
Pooja Chauhan, Executive Producer, who discovered the story and was instrumental in bringing all the pieces together to make the film happen, said, "Goldfish is a film which slowly grows on you and It is really fulfilling to know that the film was well received by its audiences in Busan. This has really encouraged us and now we are looking forward to it's Europe and US premiere in November."
Tags : Deepti Naval Kalki Koechlin GOLDFISH