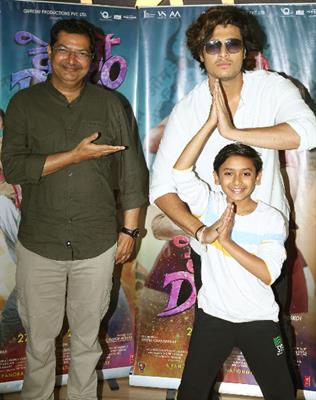 Manoj Sharma's upcoming film Dehati Disco, who has also written many comedy films in Bollywood, is releasing on 27th May. The trailer and songs of the film starring Ganesh Acharya, Saksham Sharma and Sahil Khan in the lead roles have got an overwhelming response.
Manoj Sharma says, "Dehati Disco has music, dance and action. Ganesh Acharya represents our desi dance and is going to make people crazy with his style of dancing. Father-son Bhola and Bhima will make the audience emotional, and also make them laugh. Apart from Ganeshji, Saksham Sharma and Sahil Khan are all excellent dancers, it will be a treat for audiences."
Sharing his experience of shooting the film, Manoj Sharma said, "In the lock down, we shot the film in Lucknow following all the protocols of the government."
Sahil Khan, who is starting his film career with Dehati Disco, said, "I had never thought that I would get a chance to act in such a interesting film. I got to learn a lot from Ganesh Acharya and Manoj Sharma. There is a distinct simplicity and freshness to the songs choreographed by Ganesh Masterji. I grew up watching his songs."
Saksham Sharma said, "This was the first time for me. I have enjoyed working with Ganesh Master ji, director Manoj Sharma and Sahil Bhayya. We took two months of training for this film. I learned dance from Masterji and acting from Manoj Sharmaji."
Manoj Sharma shared how they did a workshop with Ganesh Acharya. "For the character of Bhola, he worked hard, lost weight and gave his hundred percent as an actor. His look and body language as a villager will surely be liked by the audience. We wrote together during the lockdown, worked on the music of the film for 4-5 months. In the shooting of the film, I shot the dialogue and acting part first and then shot the dance sequence," Sharma said.
Manoj Sharma added, "It is a dancing film but with a good subject and unique concept. Dance is embedded in the culture of our country and this film is presenting our desi dance. It is as dance as a common man can do. The hook step of our films is becoming very popular. We are glad that Indian art is once again being dominated all over the world."
Other actors include Ravi Kishan, Manoj Joshi, Rajesh Sharma, Pankaj Berry who have acted wonderfully in the film. Filmmaker and choreographer Remo D'Souza has also made guest appearances in it.
The producers of the film are Gitesh Chandrakar, Wasim Qureshi and Kamal Kishore Mishra.Dehati Disco under the banner of Qureshi Productions Pvt Ltd and One Entertainment Film Productions is a complete package of entertainment for the whole family, it releases on 27th May.
Tags : Manoj Sharma Dehati Disco