Designer Anjali Phougat strongly urges people to stop judging women with their outward appearance and look beyond that. 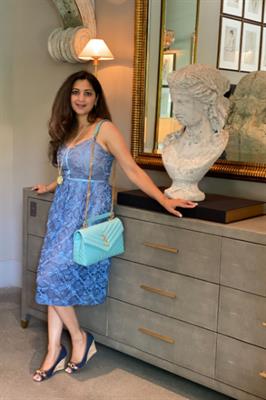 Designer Anjali Phougat strongly urges people to stop judging women solely on their outward appearance and to be forgiving and also to prioritize other qualities above a woman's size.
Anjali Phougat, an Indian-origin fashion designer residing in the United States, speaks out against body shaming. A number of well-known celebrities favour her work. Recently Anjali Phougat worked with Miss Universe 2021, Harnaaz kaur and created several looks including jewellery,outfits like Saree lehenga and several gowns for various occasions during Miss Universe’s world tour .Harnaaz was praised for her outfits  and her mesmerizing beauty worldwide wherever she went .
The Designer was surprised and heartbroken when she recently learned that Miss Universe 2021 Harnaaz Kaur Sandhu was being body shamed and called "fat" on social media. The incident didn't sit well with the designer, so she decided to speak out against it on behalf of all the other female bollywood celebrities, sports figures, and all women around the world who are being trolled or body shamed in our daily lives.
A statement is made by the designer. "Women should just be satisfied with the way they appear and feel secure in their skin and size, regardless of their physical size or what other people think or say about it. They shouldn't actually attempt to support any stereotypes. Regardless of your size, just pay attention to your physical and emotional wellness.
It's disheartening to see trolls sitting on the other side of the screen body shaming a celebrity or a woman without even knowing their health situation, those nameless or faceless people without even coming close to matching her accomplishments, and it's unacceptable for Miss Universe as well as any other woman. To my amazement, I've heard such statements from women who are trying to disparage other women. Women need to support one another, encourage one another, and work to learn from one another.
I firmly believe that Harnaaz Kaur is the pride of India. She returned the Miss Universe crown to India after a 21-year absence, which is commendable and a fantastic accomplishment for our nation. However, people's body shaming  and derogatory remarks shows their small mentality.  At the young age of 21 ,she is conquering the globe and making our nation proud.
The fashion industry needs to alter these stereotypes. People need to be understanding toward others, regardless of their size, body type, or body shape. Instead, consider the types of female role models we have in our community who are making us proud and are showing that women are in charge everywhere.  Indra Nooyi, the former CEO of Pepsi, Kamala Harris, Mindy Kaling, and a long list of other women who are above their size and shape are few great examples.
People must realise and respect that winning the Miss Universe title is a testament to someone's worth and intelligence, not merely to how attractive she is on the outside or to her gorgeous eyes and figure.
Stop criticizing women solely on their appearance; instead, be forgiving and place other traits above a woman's size.
Anyone can dress stylish. I encouraged and motivated plus size models when I unveiled a new collection during New York Fashion Week. In order to showcase the diversity of fashion, I have associated with plus size models in my runway shows. In September, I'll be unveiling a brand-new Designer Dream collection in NYFW. Fashion designers must cater to every body shape, and the industry as a whole must be inclusive.
Tags : Anjali Phougat