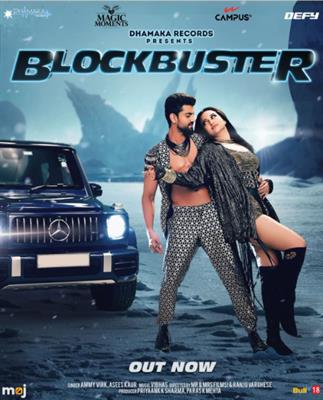 Putting up a BLOCKBUSTER collaboration like no other, Dhamaka Records brings hit jodis, actors Sonakshi Sinha and Zaheer Iqbal and music artists Ammy Virk and Asees Kaur together for the very first time for a special track. Titled ‘Blockbuster’, the song has been penned by Vibhas and Abhendra Kumar Upadhyay and features superstar Sonakshi Sinha alongside Zaheer Iqbaal as they groove to the beats of this uptempo dance track.
With BLOCKBUSTER, Dhamaka Records has truly gone the extra mile to give audiences a visual treat like never before. From the concept, to the various distinct elements like the New York Skyline, barren land and even cars falling from the sky, the music video of the track is certainly next-level and cutting-edge.
Looking suave and sporting one fashion-forward look after the next, the song is a treat for Sonakshi Sinha and Zaheer Iqbal’s fans and showcases their electric chemistry on screen apart from their killer dance moves.
Actor/Producer Priyaank Sharma of Dhamaka Records has added one more dimension to his career by directing BLOCKBUSTER, he says, "Blockbuster” is made with so much love! We worked on it day & night coz the song and the people in it are so close to us. The song is the culmination of a very talented and my favourite bunch of stars like Sonakshi Sinha, Zaheer Iqbal, Ammy Virk and Asees Kaur. I am hopeful that the audiences are going to enjoy this one as much as we all enjoyed making it! We have tried to up the style quotient with this one while trying to retain a surreal setting. I am confident this track fits all ages, all groups and all functions! Now it’s just prayers and fingers crossed.”
Adds Dhamaka Records producer, Paras Mehta, “Dhamaka Records wanted to put together a collaboration like never before and we got the best of both worlds with Sonakshi Sinha and Zaheer Iqbal coming together with Ammy Virk and Asees Kaur.”
Says Sonakshi Sinha, "I had a blast working on BLOCKBUSTER. It’s a fantastic dance track and it was great collaborating with Zaheer, Priyaank, Shaza and Janvi on this track because we are all a gang of friends, and when that mix gets added to work its magic! The song is superbly sung by Ammy Virk and Asees Kaur and Ranju has done some amazing choreography which will get everyone grooving!”
Says Zaheer Iqbal, “This song is a culmination of friendship for all of us as the entire team behind is one big unit! We are all friends, everyone who has worked on the song is known to each other, right from the director to the producer to digital and marketing teams are just a bunch of close friends. The intention was just to have a great time and work together and the result of which was fantastic! They say time flies fast when you are having fun and this is true to Blockbuster as well”.