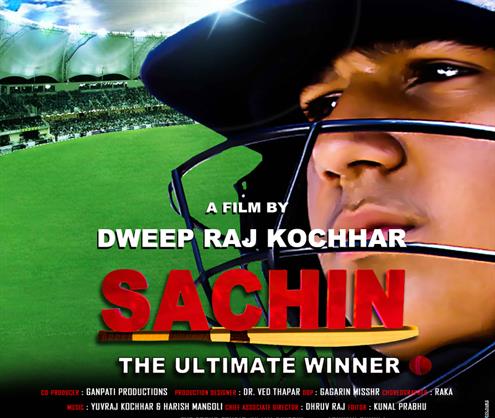 “Sachin – The Ultimate Winner”, an emotional sports drama movie is releasing in theatres on 13 January 2023. This film is especially for the children, youth and every youngster of this country. This movie is about a boy named Sachin who wants to become a world-class cricketer just like his inspiration Sachin Tendulkar. Since he is good at playing cricket opponents usually get jealous of him and one day they tried to hurt him. Sadly, Sachin got paralysed which shattered his dreams and later his family members, his couches gave him the strength to recover. And then after some days he finally recovered and came back on the field.
This film is giving a message that no one should give up under any circumstances. You can change your destiny by doing hard work and by showing and having dedication towards your goal. It is definitely a must-watch movie for children who are currently going to school. The mesmerizing shooting Locations of this film were Mohali, Panchkula, Chandigarh and Morni Hills.
Dweep Raj Kochhar is the Director, Producer, Story Writer, Lyricist, and Executive Producer and he has also done Screenplay and Dialogue along with Dhruv Raj and Yuvraj Kochhar and apart from this, he is also playing a role in this film. This movie is Produced under the banner of J S R Productions Pvt. Ltd. The Starcast of this movie is Dr Ved Thapar as Sachin's Coach. Shivani Sharma as Sachin's Mother. Dhruv Raj as Opponent's Coach. Dweep Raj Kochhar as Sachin's milkman - Nihaal Singh.
Muskan Panwar as Sachin's Sister and Naver Sharma as Opponent Team Captain. This movie is Co-Producer by Seven Colours Entertainment, the Music is by Yuvraj Kochhar and Harish Mangoli, and the cinematography is done by Late Sh. Gagarin Mishra and the Editor of this film is Eye Focus Studios in Andheri. The costumes are by Bablu, the Background Score is by Suprateek Hui and the choreography is by Raka. The overall Cast & Crew of this film is Dr Ved Thapar, Shivani Sharma, Mukul Cheeru, Dweep Raj Kochhar, Dhruv Raj Kochhar, Naved Sharma, Rukmani Shod, Jyotsna Upadhyay and Muskan Panwar.
Director Dweep Raj Kochhar Said "The movie have special massage for society that "No one can defeat you if you are not defeated by yourself. Never ever quit..keep on trying and you will succeed one day, Go and watch this different film, which has this motivating journey of a child on 13 January 2023 in theatres.
Tags : Dweep Raj Kochhar Sachin – The Ultimat