Elli AvrRam shares a sneak peek from her film Goodbye which is all set to release on 7th October! 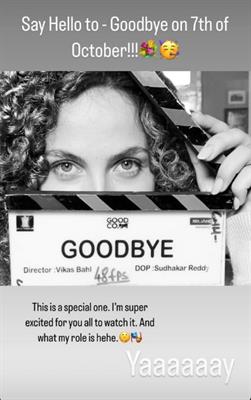 Elli AvrRam’s exciting pipeline of projects has been the talk of the town. One of her most awaited films, Goodbye has now got a release date and the fans can’t be any happier!
The film stars Elli AvrRam along with Amitabh Bachchan, Neena Gupta, Rashmika Mandanna, Sunil Grover & Pavail Gulati and will release on 7th October. The versatile actress took to Instagram and shared a clap picture of her. This unseen picture was directed to the audience where she told them she can’t wait for them to see her role in the movie !
Speaking on the same Elli says “This is one project I am super excited for. To star alongside such stalwarts and legendary actors is a dream come true and the entire shoot process has been both enriching and educational. All I want to say is, say hello to Goodbye on 7th October!”
Apart from Goodbye Elli also has Ganapath in the pipeline along with Tiger Shroff, A south film opposite Dhanush Naane Varuven and a short film that is soon to be announced !
Tags : Elli AvrRam GoodBye