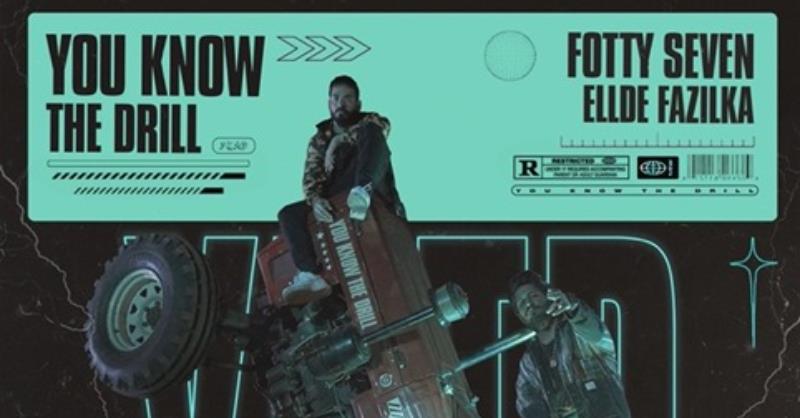 Fotty Seven, who has solidified his place as one of the most influential emcees and lyricists of modern Indian hip-hop, is back with yet another mind-blowing song after his first release Banjo with Def Jam India, "You Know the Drill," featuring Punjabi singer and lyricist Ellde Fazilka.
"You Know the Drill" is a song about faith and having unwavering belief in oneself. The song further emphasises the significance of self-belief. Through extremely personal lyrics, Fotty highlights the times when he didn't have anything. But he has, however, changed his and everyone else's lives through years of hard work.
The music video of the song will take you through the small streets and lanes of Old Delhi and Chandigarh, highlighting the essence of old India through a strong graphic lens. Shot by one of the finest global underground hip-hop film maker, Azar Strato. Being genuine and expressive by nature, Fotty tries to blend himself with people to understand them. To shoot this prominent music video, director Azar Strato, was flown down from Russia to bring his vision to the music and his unique take on India as a country. Azar Strato has shot for artists like Octavian, Fardi + many more global artists
Fotty’s main source of inspiration is his culture; the music video depicts the determined effort to highlight the daily lives of people in Delhi and Chandigarh. You can see clips taken at Jama Masjid, Chandni Chowk, Rock Garden & many other iconic places in order to accentuate the local culture and show the human side of these cities.
Talking about the song, Fotty Seven says, "This song holds a very special place in my heart as it talks about a different side of north India from where I come. Working with Ellde Fazilka was an amazing experience, as was shooting with such an incredible filmmaker, Azar Strato. I believe true wealth is living a happy life and being proud of who you are, and that is what "You know the Drill" is all about. I hope my fans and audience love and appreciate the work we’ve put in for this release."
On the release of You Know the Drill, Punjabi singer and lyricist Ellde Fazilka says, "The song describes the real culture and the lives of people through a different lens. I’m happy to have worked with Fotty, as he's a very talented artist. This is my first release with Def Jam India, and I am really looking forward to this association."

Def Jam India is Universal Music India’s new label division within India and South Asia dedicated to representing the best hip-hop and rap talent from the region. Def Jam India follows the blueprint of the iconic Def Jam Recordings label, which has led and influenced cutting-edge hip-hop and urban culture for more than 35 years. While Def Jam is a global hip-hop powerhouse that represents an iconic roster of artists such as LL Cool J, Slick Rick, Public Enemy, Beastie Boys, Kanye West, Jay-Z, Rihanna, Pusha T, Dave East, YG and many more; Def Jam India has strived to elevate the Indian imprint of hip-hop by working with some of the biggest Indian hip-hop artists such as Dino James,Raga, Fotty-Seven and Wazir Patar.