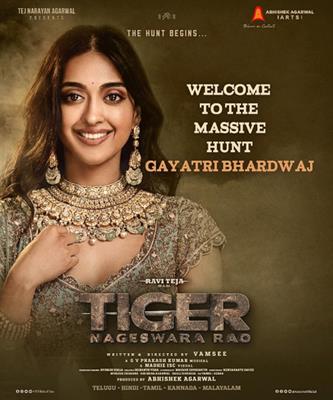 Mass Maharaja Ravi Teja and Vamsee’s Pan India Project to be produced by Abhishek Agarwal under Abhishek Agarwal Arts and to be presented by Tej Narayan Agarwal will have its grand opening tomorrow on Ugadi. As announced by the makers, the film’s pre-look will also be dropped on the festival occasion.
Nupur Sanon, sister of Bollywood star heroine Kriti Sanon will be playing one of the lead actresses in the movie, as it will feature another actress. Popular model Gayatri Bharadwaj comes on board to play the other heroine in the movie. Like for Nupur, this is first film for Gayatri Bharadwaj as well. Both the heroines will have scope to perform in the movie.
Gayatri Bhardwaj was crowed as fbb Colors Femina Miss India United Continents 2018. She also won the titles of Sephora Miss Glamourous Look, Jio Miss Popular, Kodak Lens Miss Spectacular Eyes, Miss India Delhi 2018 etc. She won praises for her performance in the web-series Dhindora.
Tiger Nageswara Rao will be made in Telugu, Tamil, Kannada, Malayalam and Hindi languages. Based on the life of the notorious thief from Stuartpuram, Tiger Nageswara Rao is going to be highest budgeted film for Ravi Teja. This will mark first Pan India project of the actor.
GV Prakash Kumar will score muic for the film that has dialogues by Srikanth Vissa. R Madhie ISC will crank the camera and Avinash Kolla is the production designer. Mayank Singhaniya is the co-producer.