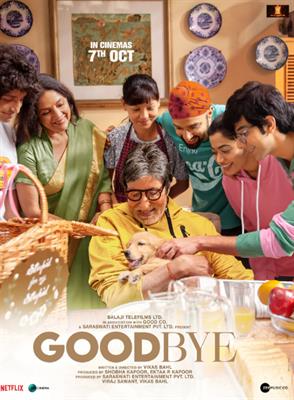 Megastar Amitabh Bachchan and Rashmika Mandanna starrer ‘GOODBYE’  has raised the expectations of the audience ever since the trailer was launched, the fans are anxiously waiting for the endearing dramedy of the Bhalla family to unfurl on 7th October in cinemas. The trailer has already crossed 25MN+ views across all social media platforms and is being loved by everyone.
The trailer of the movie consisted of a melody from the song ‘Jaikal Mahakal’ in the background and the audience immensely adored the tune hence on ‘public demand’ the makers have decided to drop the first song  ‘Jaikal Mahakal’ on 12th September 2022.
Helmed by Vikas Bahl, the movie showcases the Bhalla family’s journey of dealing with grief and then being there for each other through the different turns of events. The film’s heart-touching storyline and incredibly accomplished star cast have already intrigued the audience to watch the upcoming family drama.

Produced by Ektaa R Kapoor’s Balaji Motion Pictures in association with Good Co., GoodBye is all set for worldwide release in cinemas on 7th October 2022.