Grand premiere of film 'Mali-The Gardener' to be held in Melbourne! 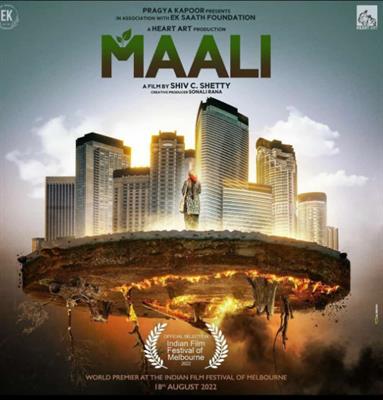 “Every film you make, every story you share, every memory you create, it is just so incredibly special. This selection reminds me that no matter where you are from, your dreams are valid.” Thus spoke Hemwant Tiwari, the young actor from Jharkhand, Bihar, who is proud of his love affair with the Indian Film Festival of Melbourne(IFFM). For this is his second world premiere at the same festival after his directorial debut Lomad made its global foray by premiering at the IFFM.

Produced by Pragya Kapoor, the driving force behind films like Kedarnath and Chandigarh Kare Aashiqui and directed by Shiv C Shetty with creative producer Sonali Rana, Maali - The Gardener focuses on relationships set on the backdrop of environmental consciousness.

Hemwant Tiwari made his histrionic debut with Life is Beautiful (Zindagi Bahut Khoobsurat Hai) that made its way to Cannes’ Court Metrage, a film directed by Bobby Pushkarna and written by Kavita Pushkarna.

His next short film as an actor-director, Salaam was a touching ode to friendship and the gory violence and atrocities that love ignites in our society.

Panaah, a film directed by Vinod Pandey, saw Hemwant Tiwari as a wounded soldier seeking shelter in the middle of ethnic violence in Kashmir.

Hemwant Tiwari has also starred alongside Eric Roberts and Natasha Henstridge in director Ahmad Bakaar’ series, the first sci-fi Arab series and the first 3D movie from the Middle East, titled Medinah, in which Hemwant Tiwari played a bus driver in charge of taking people back and forth to their places, but instead teleports 12 random people into different dimensions thanks to a failed experiment.

Hemwant Tiwari’s ambitious feature film directorial debut Lomad, the 90-minute black-and-white film shot in a single continuous shot, with no camera cuts and no editing, has been winning over 40 awards and accolades for the actor-director the world over. Hemwant Tiwari has also been bestowed the prestigious 11th Dadasaheb Phalke Film Festival Award besides being featured in Forbes magazine for the same. Lomad recently received the Indian Book of Records’ certification for Maximum Awards Received by a black and white single-take film as well.

Maali - The Gardener sees Hemwant Tiwari spend his time with his only first love - acting.

“In Maali - The Gardener, I am playing a husband who amidst his own stress and pressure is trying his best to avoid the worst to happen with his wife who is suffering from mental health issues.”

“This film would not be possible without the dedication of Shiv and Sonali and the belief of Pragya Kapoor. I am truly honored to be a part of this film.”

The film premieres at IFFM on the 18th of August, 7 pm, at the HOYTS Melbourne Central.
Tags : Mali The Gardener