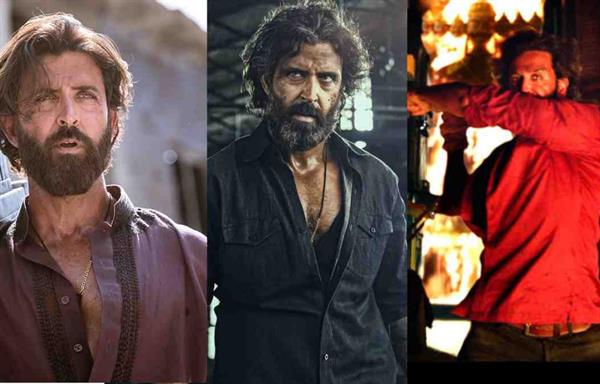 Hrithik Roshan and Saif Ali Khan starrer Vikram Vedha is all set to release worldwide on September 30th 2022. The teaser of the film gave viewers a glimpse of the characters of Vikram & Vedha while introducing audience to the intriguing story.
Vikram Vedha's teaser received a thunderous positive response from the audience and stands to be the Most Liked Teaser for A Hindi Film.
While the teaser gave a sneak peek into Hrithik Roshan & Saif Ali Khan's looks and onscreen characters, the trailer of the film is touted to be an action packed thrill ride, notches above the teaser.
News is that Hrithik will be seen in 3 different looks as Vedha.
Vikram Vedha also marks to be a career milestone for Hrithik Roshan as the film stands to be his 25th Film.
Sources share, "As an actor Hrithik has always dared to adapt into his onscreen characters. From looking the part, to imbibing the mannerisms, right from his debut film Kaho Naa.. pyar hai to his last releases Super 30 & War, whenever Hrithik does a film, he makes it a point to transform and surprise."
Further adding, "Vikram Vedha will showcase the journey and backstory of Vedha. For this, Hrithik will be seen sporting 3 different looks in the film. The trailer opens up the world of Vikram Vedha a lot more, where the audience can witness Vedha in his full glory."
Hrithik Roshan is known to be one of the most versatile Indian actors who delivers a visual treat to his audience with each of his film release.
This was no different for Vikram Vedha, with the audience hailing Hrithik as Vedha ever since the teaser & posters of the film were launched.
Vikram Vedha is an action-thriller written & directed by Pushkar-Gayatri. The story of Vikram Vedha is full of twists and turns, as a tough cop Vikram (Saif Ali Khan) sets out to track and chase a dreaded gangster Vedha (Hrithik Roshan). What unfolds is a cat-and-mouse chase, where Vedha - a master storyteller helps Vikram peel back layers through a series of stories leading to thought-provoking moral ambiguities.
Vikram Vedha is presented by Gulshan Kumar, T-Series and Reliance Entertainment in association with Friday Filmworks & Jio Studios and a YNOT Studios Production. The film is directed by Pushkar & Gayatri and produced by Bhushan Kumar & S. Sashikanth and Reliance Entertainment. Vikram
Vedha will hit the big screens globally on 30th September 2022.
Tags : Vikram Vedha hrithik roshan saif ali khan