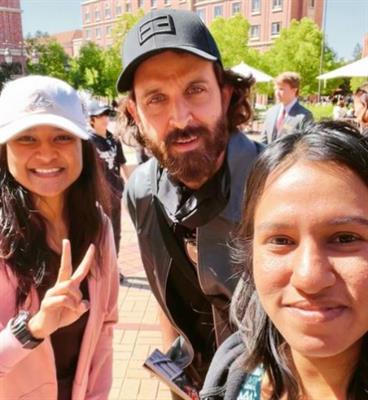 Hrithik Roshan is unarguably one of the most loved superstars in the country and one who has always kept it real both on and off screen, exhibiting humility and kindness with his fans in every interaction.
It was only recently that Hrithik travelled with his sons to Los Angeles where they visited the USC campus, much to the surprise and excitement of the students.
The campus was brimming with excited conversation as tons of fans rushed to catch a glimpse of the superstar and he happily obliged them with pictures and conversation.
Some of the students took to social media to talk about their interactions – While one narrated how there was running and chaos to meet Hrithik, the other spoke about how her interaction gave her memories for life.

random desi dude just approached me and asked “HAVE YOU SEEN HRITHIK ROSHAN??”

Not too long ago, fans also responded to Lauren Mordery’s  ‘Tell me the strangest interaction you had with a celebrity’ quiz on social media, where one narrated how Hrithik Roshan walked up to greet her, while another mentioned how he helped her push her cart at a shopping mart.

These and several other such anecdotes have only reiterated how the superstar is one of the most loved personalities across the globe and one who continues to give that love right back to his fans.

guess who was at USC today? HRITHIK ROSHAN!!