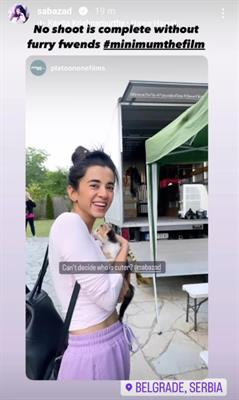 Bollywood actress Saba Azad grabbed the attention of the millions with her role of Parvana Irani in Rocket Boys. The actress is currently working on her recently announced film, 'Minimum' in which she will be seen slipping into the role of a French girl and seems like she is having a great time on the sets.
Taking to her social media, the actress shared a furry picture with a cute dog from the sets in Belgrade, Serbia, while she wrote on the picture -
"No shoot is complete without furry fwends #minimumthefilm" 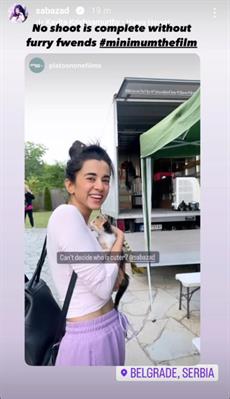 Saba is running down a busy schedule with back-to-back shoots along with her band Madboy/Mink. Apart from 'Minimum', Saba will be soon starting prep for Rocket Boys season 2.
Tags : Saba Azad Hritik Roshan