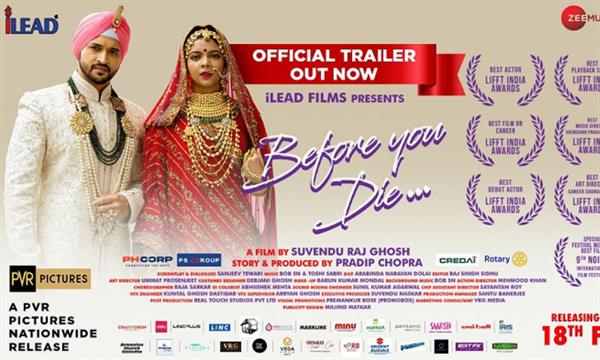 iLEAD Films presents ‘Before You Die…’, the directorial venture of Suvendu Raj Ghosh is all set to release its trailer. The film is now slated to release on 18th February 2022. The film will introduce Puneeth Raj Sharma and Kavya Kashyap as lead actors. Zarina Wahab, Mukesh Rishi, Pradip Chopra, Mushtaq Khan, Arha Mahajan, Badshah Moitra, Rita Dutta, Lovekansh Garg are amongst the other cast.

With the launch of the trailer, they will also launch a unique book café located in the central business district of Kolkata- Shakespeare Sarani (formerly known as Theatre Road) and it is called Before You Die Café. It will be inaugurated by Mr. Soumen Mitra, retired IPS, and currently Officer on Special Duty (OSD) and Director Training. The book café is located right next to Bhartiya Bhasha Parishad that promotes various languages, mainly our national language Hindi. This café will not just serve coffees and savories but also have like-minded people from different fields carrying out creative discussions, intellectual activities, book and trailer launches.

The café is surrounded by a beautiful public park where people come for their morning and evening walks and there is a Girls’ College too which runs post graduate programs including program on Hindi literature.

Looks like we have amazing stories coming our way from this attractive proposed café that has an amazing stock of books from all over!

Pradip Chopra will also introduce his book called ‘131 Things to Do Before You Die…’.

Along with the trailer launch, Pradip Chopra will also introduce his book called ‘131 Things to Do Before You Die…’. It is compiled by him and his colleague Asha Singhvi.

Writer Producer Pradip Chopra says, “Before You Die…will be the first film to launch its trailer at the café. I have had a special bonding with this film from the time I penned down but never thought it would turn to be this grand even before its release.”

The film has already been recognized in film festivals like LIFFT India Awards 2022 and recently a Special Film Mention at the 9th Noida International Film Festival- 22.

Director Suvendu Raj Ghosh says, “I am glad to have such amazing and intellectual people believing in us and our film. The journey so far has been a beautiful ride with Mr. Pradip Chopra and the cast of the film. I am now looking forward to the audience reaction.”

Also Read :ESHA GUPTA ROPED IN FOR SAMIR KARNIK'S NEXT WITH SANJAY DUTT AND SUNIEL SHETTY!?