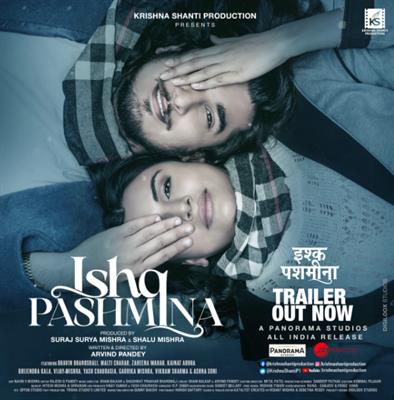 Krishna Shanti Production presented ‘Ishq Pashmina’ is back again to serve the anticipation of the audience. The upcoming film featuring the lead actors – Bhavin Bhanushali and Malti Chahar has arrived with its trailer.
The trailer begins in a poetic style which depicts that the film will be intense and different from your usual love stories. The visuals and the background music are very captivating to the eyes and ears. The chemistry between the two leads - Karan and Omisha is portraying the potential of tapping into the emotions of the audience and joining them. The trailer is burying a lot of mystery into it which piques the interest of the audience and leaves them wanting more. The story seems to be as if it will be something that the audience hasn't seen yet. The trailer features a lot of layers and intense love. A secret threatens their sweet bubble of love and forces them to part ways. Will these two wounded souls be able to overcome these hurdles and emotions set in place by the world?
The trailer also features Zarina Wahab and Brijendra Kala who are actors in their own league and always deliver more than what the role requires. Apart from Bhavin Bhanushali, Malti Chahar,  Zarina Wahab and Brijendra Kala, the film will feature Kainat Arora, Gaurika Mishra, and many more.
Debutant Director Arvind Pandey shares, “We are excited to unveil the trailer. It's like our baby that we have been taking care of, paying attention to all the fine and finer details and getting it ready to meet the audience. Ishq Pashmina is and will be forever close to my heart. Being the first ever Direction of mine, I have gained immense experience and I’m thankful for the producers who have been patient and allowed me to explore my vision. I hope the audience will love the trailer and the film following its release.”
Being released under the banner of Krishna Shanti Production, the film 'Ishq Pashmina’ is produced by Suraj Surya Mishra and Shalu Mishra who are very confident about the movie and are very eager to deliver it to the audiences. They have a clear goal of supporting young talent as they profoundly believe that the young talent needs more representation in today's time. And providing them with a platform to unleash their true potential is our responsibility to support them in the industry. Suraj Surya Mishra firmly believes that this film will certainly set a new standard in the industry.

Music is provided by Composers Sham-Balkar and Shashwat Prakhar Bhardwaj. Editing is done by Rajesh Pandey, cinematography by Navin V Mishra and casting done by Mitul Patel. The film will be hitting the big screens near you on September 23, 2022