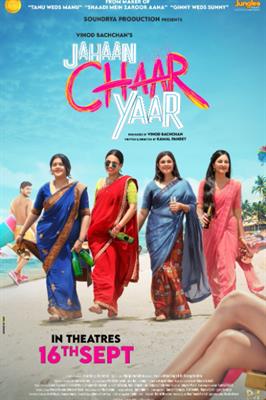 Four buddies on a trip of their lives! While Bollywood has successfully played with this trope in the past, seldom do we see a rollicking ride of dosti-yaari that features women. Well, looks like Swara Bhasker, Shikha Talsania, Meher Vij and Pooja Chopra are all set to change that trend... if the trailer of their upcoming release is anything to go by.
Jahaan Chaar Yaar’s trailer is an engrossing and enjoyable affair that features all leading ladies at their witty best. The film tells the story of four middle class women who are stuck in a rut of one kind or another. To escape all this noise and recharge their souls, this desi girl gang decides to head to Goa. Little do they know that a life changing set of thrills and twists await them in the party capital!
The promo features many humorous sequences as Swara, Shikha, Meher and Pooja exchange hilarious banter. The actresses also get to showcase their impeccable acting skills in some dramatic moments. The mesmerizing Girish Kulkarni also makes an impactful appearance in the trailer.
Written by Kamal Pandey, the movie also marks his directorial debut.
Talking about the film, producer Vinod Bachchan says, “Jahaan Chaar Yaar is not just a story of four female friends, it is an entertaining tale that will bring a wide smile on everyone’s face. It will genuinely make audiences want to pack their bags and head on an adventure with their pals”.
The producer of memorable hits such as Tanu Weds Manu, Shaadi Mein Zaroor Aana and Ginny Weds Sunny, he also adds, “The leading ladies have all lent incredible performances, and viewers will have a gala time witnessing their sparkling on screen chemistry”.

If the trailer is such a bright blast of female yaari, audiences have quite a fun filled extravaganza to look forward to Jahaan Chaar Yaar, a Soundrya films production, produced by Vinod Bachchan, directed by Kamal Pandey, in theatres from the 16th of September.