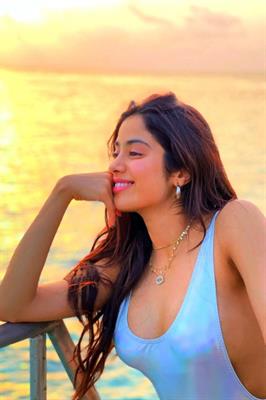 When life gives you lemons, you don’t just make lemonade; it’s the universe’s way to test how you hustle to survive and thrive! Disney+ Hotstar introduces an all-new story of hustling and surviving with an unusual comedy, Goodluck Jerry. Revolving around the life of a young girl, Jerry, the movie comically puts together her struggles as she goes above and beyond to save her ailing mother. But her path remains riddled with twists and turns in this journey bringing hilarious moments of chaos and comedy.
The film stars Janhvi Kapoor as the docile yet gritty character along with a terrific ensemble, including Deepak Dobriyal, Mita Vashisht, Neeraj Sood and Sushant Singh. Janhvi Kapoor helms the role of Jerry, an ordinary girl from a small town in India, it was important to grasp the dialect for this role of the town she represented. Here’s how she did it!
Commenting on her dialect for GoodLuck Jerry, Janhvi Kapoor said, "I trained extensively for the Bihari dialect. We had a few coaches namely Ganesh Sir & Mr. Vinod. We attended a workshop and listened to all those songs, he even made me do an exercise wherein he would make me say Bihari abuses as a part of the training. The whole process was a lot of fun eventually. I am so thankful about getting to know the syntax of that section of our country.”
Directed by Siddharth Sen and produced by Aanand L Rai’s Colour Yellow Productions, Lyca Productions and Mahaveer Jain, the film will release on July 29, 2022 on Disney+ Hotstar.
Join Jerry’s roller-coaster journey for survival in con-medy GoodLuck Jerry, releasing on July 29, 2022 on Disney+ Hotstar .
Tags : Janhvi Kapoor Good Luck Jerry