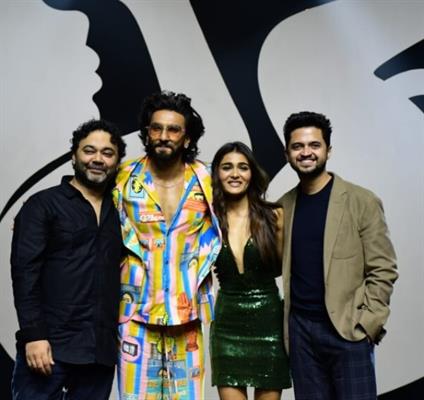 Superstar Ranveer Singh is starring in Yash Raj Films’ Jayeshbhai Jordaar, a big screen family entertainer that will present a new brand of hero and heroism that is rare in Indian cinema. Ranveer plays an unlikely hero who stands up for his unborn child and wife and in that process, has to take on his family that’s representative of the patriarchal society that we live in. Ranveer considers the film to be a must watch and admits that Jayeshbhai Jordaar has an incredibly talented cast comprising Boman Irani, Ratna Pathak Shah, Bollywood’s big screen debutant Shalini Pandey and Jiya (check full name + spelling), who plays Ranveer’s daughter in the film.
Ranveer is all praise for Boman saying, “Jayeshbhai has incredibly talented actors. Boman Sir is somebody whose craft I have admired for a very long time. He has created some of the most memorable characters in Hindi cinema. He is one of a kind, absolutely inimitable and irreplaceable. I feel like he elevates any film that he is a part of. I have had extended interactions with him off camera, and his personality, his world view, his philosophies. I've been deeply engaged with him off camera and he is like a guru to me. Performing scenes with him, it really goes in the highlight reel of my career, just to be sharing screen space with a legendary actor like him.”
About the towering Ratna Pathak Shah, he says, “This is the first time I am working with Ratna maam. Ratna maam's kids used to be in my school. She used to always be around during dramatics and annual day. Again, an artiste whom I admire so much. I've seen her perform live on stage, I've seen her perform on television, in films. She's such an accomplished artist with such a vast body of work, a real master of her craft. I always knew it when I saw it but to experience it first hand on set, was really something else.”
He adds, “She is absolute magic, an actor who is so present that she compels you to be in the moment. She doesn't shy away from giving her suggestions, and they are always absolutely brilliant. If it's something good she will be sure to express it, when it's something not so good, she will express that too. She is absolutely effortless and I think that some of the scenes that I've performed with her are some of the best scenes of my entire career.”
On Shalini’s acting skills, Ranveer says, “Shalini is somebody who everybody knows, her performance and what she was able to do in the original Arjun Reddy. Her performance was so lauded. In Jayesh Bhai she will be opening up another facet of her personality. The graph of her character was actually the most difficult to execute and I've seen the amount of passion, sincerity and effort that she's put in, and in close tandem with Divyang, to deliver her absolute best. I am confident that she will shine on screen. She's also somebody who I have an immense amount of affection for.”
He adds, “As a newcomer, what's refreshing to see about Shalini is, she is really about the work. She is not insecure. She is driven and she translates that into work energy. She is grounded. The story of how she made it in show business is astonishing. Somebody who I have genuine affection for, because of the lovely energy that she has, the lovely vibe. She is a clean hearted, good, grounded girl who has a very bright future ahead of her for the person that she is, the professional that she is, the worker that she is.”
Ranveer feels Jiya is an absolute revelation in the film. He says, “Jia is an absolute prodigy. When Divyang told me the script, I told him that the character of Siddhi that he has written is such a great character, like a wild one. The challenge was to cast somebody who could justify such a beautifully written character. We always knew that the onus would be on the casting director, to find somebody who could do justice to such a wonderfully written part. And we found Jia who is an absolute prodigy.”
He adds, “She fit the bill, she is so full of spunk. What's astonishing is that she performs so seamlessly. I am left in awe many a time, in the way that she's so effortless on camera, so unconscious. She is a natural, it's not something that can be taught. She's just an absolute natural. The way she takes the instructions, makes it her own and puts it into her performance is an absolute natural gift, you can't teach these things. I am a trained actor. I can recognise that Jia is a natural and she's extremely talented and she's probably the best part of the movie.”
A hilarious satire on society - Jayeshbhai Jordaar, produced by Maneesh Sharma, also stars Arjun Reddy famed Shalini Pandey, who debuts on Bollywood’s big screen opposite Ranveer. The film has been directed by debutant Divyang Thakkar and is releasing worldwide today!