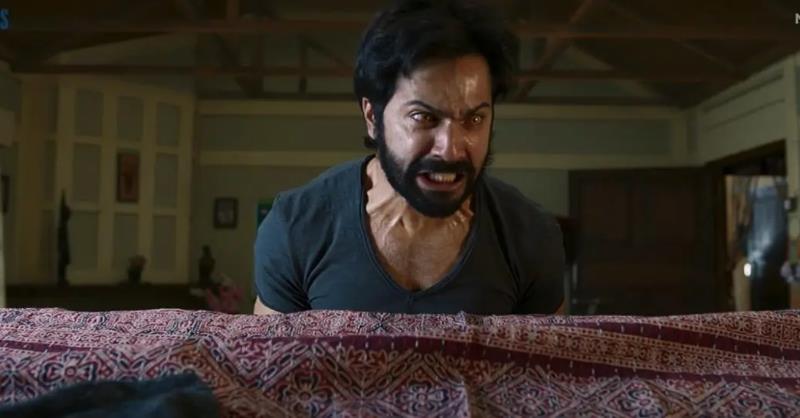 If the trailer announcement saw the whole world go gaga, Bhediya’s official trailer is about to take the buzz to another level!
On the occasion of Varun Dhawan's 10th year in Bollywood, Jio Studios and Dinesh Vijan have unveiled Bhediya's much awaited trailer in Hindi, Telugu and Tamil.
Set in the mesmerising forests of Arunachal, the Varun Dhawan-Kriti Sanon starrer tells the story of Bhaskar, a man who gets bitten by a mythical wolf, and begins to transform into the creature himself. As Bhaskar and his ragtag buddies try to find answers, a bunch of twists, turns and laughs ensue.
The trailer shows an exciting sneak peek of Varun turning into the Bhediya, and other stunning glimpses of the wolf in action. A key standout is also the principal cast’s sparkling comic chemistry. May it be Varun and Kriti, or Deepak Dobriyal and Abhishek Banerjee, each showcases laugh out loud comic timing.
The Dinesh Vijan production has been making waves for its intriguing premise and breathtaking VFX. MPC, the award winning Hollywood studio behind 'Top Gun: Maverick’, 'Mortal Kombat', 'Godzilla vs. Kong' and 'Ad Astra' has helmed the creature comedy's visual effects.
Talking about the trailer, director Amar Kaushik says, “Our trailer gives a small taste of the enthralling adventure audiences are in for. Bhediya is crafted to be enjoyed in cinemas. It will fill you with a sense of awe and wonder, and tickle your funny bone with laughs galore. We are glad that it arrives in all its big screen glory soon”.
Elaborating on the journey, producer Dinesh Vijan says, “Bhediya is Maddock’s attempt to deliver a world class spectacle in record time. A complete family entertainer with spectacular VFX, this is a grand cinematic experience for all generations. It has phenomenal talent like Amar Kaushik at the helm; he has masterfully combined comedy and thrills to give you India’s first creature comedy”.
Bhediya marks Varun and Dinesh Vijan's creative reunion after the universally acclaimed Badlapur. It is also Amar Kaushik’s third directorial venture with Jio Studios and Maddock Films following the success of Stree and Bala.
Well, if the trailer is anything to go by... epic laughs, epic thrills and an epic ride awaits audiences this November.