Karan Razdan Stands Against Politicization and Misrepresentation of the word Hindutva 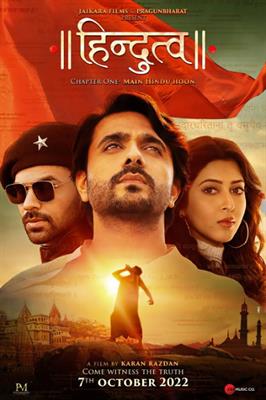 Filmmaker Karan Razdan is all set to launch the second motion poster of his movie Hindutva which is slated to release on 7th of October in theaters across the country. The movie has been garnering a lot of attention with its storyline and the strong title. Razdan, who has written films like Dilwale, Trimurti, Dushmani, Diljale and directed films like Girlfriend and Mr. Bhatti on Chutti, feels very strongly about the message that his forthcoming film is carrying.
Delving more into the story of Hindutva, Karan Razdan says, “The movie is but obviously political in nature. While there is student politics in the movie, Hindutva also focuses on the politicization of the word 'Hindutva'. Some politicians for their personal gains have brought this word into a lot of disrepute, not only in India but also globally. This became such a cause of concern for me that I decided to make a film with this very word Hindutva as its title. This misrepresentation of the word Hindutva would also bring all Hindus into disrepute all over the world which in turn would affect the reputation of our country.
These hypocritical politicians did not consider that their greed for power could have serious repercussions on the growth of our country. If not brought into check, the FDIs coming into this country could seriously be hampered. When the image of a country is tarnished, naturally the global investors are going to be vary about investing in such a nation. This has deeply disturbed me and I wanted to do something about this hence the movie. So Hindutva, my film, wants to stop the politicization of this word Hindutva."
Produced by Jaikara Films and Lord Shiva Communications, a Pragunbharat presentation, the film is written, produced and directed by Karan Razdan.
The movie stars talented actors such as Aashiesh Sharrma, Sonarika Bhadoria, Ankit Raj, Govvind Namdev, Dipika Chikhlia, Anup Jalota, Satish Sharma , Agast Annand, Surmeet and Mukesh Tyagi amongst others. Hindutva is slated to release on the 7th of October in theaters across the country by Pen Marudhar.
Tags : Karan Razdan hindutva