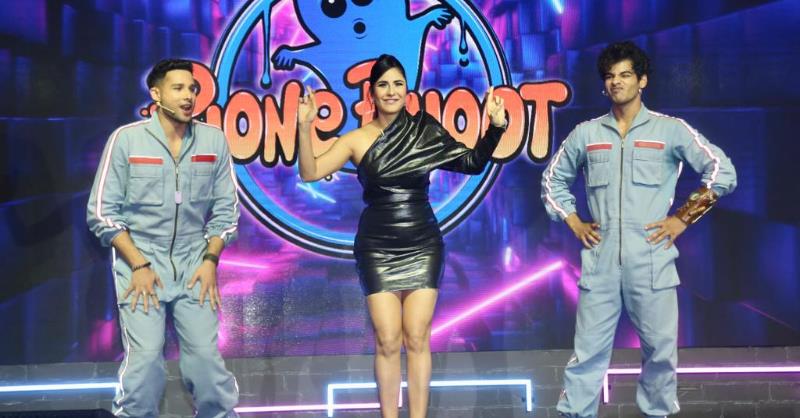 After launching the impressive trailer and foot-tapping Punjabi dance numbers - ‘Kinna Sona’ and ‘Kaali Teri Gutt’ from the highly-anticipated ‘Phone Bhoot’ featuring Katrina Kaif, Siddhant Chaturvedi and Ishaan, the makers of the comedy of horrors have revealed the entire album of the film at a grand audio launch event in Mumbai.
The audio launch event was indeed a grand and entertaining affair, as it witnessed the presence of the movie cast with the producer, director, music composers, and singers.
From Katrina performing live on the foot-tapping songs - 'Kinna Sona' & 'Kaali Teri Gutt' along with her co-stars Ishaan and Siddhant, to their fun banter on stage with the movie's singers and composers, the glamorous and musical night was an affair to remember.
Interestingly, Katrina, Siddhant, and Ishaan were in high spirits and remained on stage dancing their hearts out throughout the entire evening along with the singers and composers of the movie who performed on their respective songs from the film. The actors also interacted with the media and fan clubs, thereby inviting them on stage for a quick game session and also shook a leg with them on the energetic dance numbers.
The evening concluded with dhol walas making dhamakedaar entry on stage playing the songs - Boliyan and Kaali Teri Gutt from the movie.
The quirky, humorous trailer of 'Phone Bhoot' is a testament that the film is surely going to be the best comedy of horrors that the audience will witness in cinemas this year.
Directed by Gurmmeet Singh and written by Ravi Shankaran and Jasvinder Singh Bath, ‘Phone Bhoot’ is produced by Excel Entertainment, headed by Ritesh Sidhwani and Farhan Akhtar. The film is all set to be released on 4th November 2022.
Tags : katrina kaif Siddhant Chaturvedi Ishaan Khattar Phone Bhoot