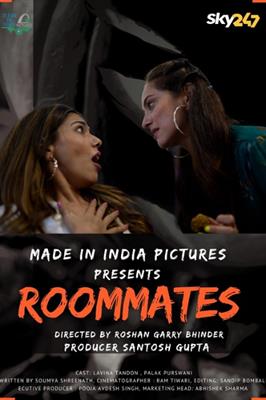 Actresses Lavina Tandon and Palak Purswani, who have made a name for themselves in the world of television, have now gone one step ahead.

Yes, these Actresses, who have essayed diverse characters on the small screen, are now doing wonders in Roommates, the story of two pretty women, two roommates.

Sometimes, in a life where one-upmanship has become the norm, one move can be a game changer or one game can be a life changer. Roommates is one such film that is about two women, a web of deceit and a game where you move from being a pawn to crowning yourself queen.

Produced by Santosh Gupta, Made In India Pictures and Sky247, Roommates is directed by Roshan Garry Bhinder, written by Soumya Shreenath, cinematography by Ram Tiwari, editing by Sandip Bombale and Ankit Pednekar.

The Executive Producer is Pooja Avdhesh Singh and the Marketing Head is Abhishek Sharma.

Getting back to the actresses, Laveena Tandon has been the face of television serials like Jodha Akbar, Naagin, Baalveer, Pyaar Tune Kya Kiya, while Palak Purswani was a strong contender for SplitsVilla 7 as well as the serial Badi Devrani, besides Yeh Rishtey Hain Pyaar Ke and Meri Hanikarak Biwi.

Apart from this, the duo has also proved their mettle in web series and will soon be shining stars in the OTT horizon. Here is looking forward to more from these amazing talents.