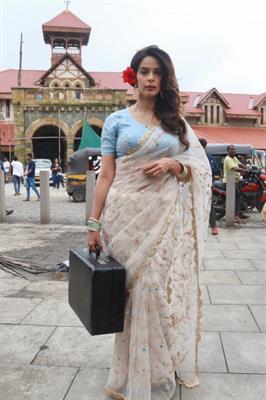 With Rajat Kapoor's upcoming RK/Rkay, the diva Mallika Sherawat will be coming back on the screen after a long time. In this quirky behind the scene drama, the actress will be seen playing the character of Gulabo who is searching for the missing hero of the film and her search has bought her to the Bandra station.
Recently the actress was spotted at the Bandra station in the search of her missing hero Mahboob. The actress donned her 70s attire in a saree and a red rose in her hair. Rajat Kapoor who played Mahboob in the film whose shooting is going on in the film promised Gulabo that he will meet her at Bandra station and now she is here. So it would be interesting to see if she would meet her hero here or if the search goes on with the team ahead.
The film will be released in theaters on 22nd July 2022. The film produced by Priyanshi Films (Priyam Srivastava and Harshita Karkare) stars Mallika Sherawat, Kubbra Sait, Ranvir Shorey, Manu Rishi Chadha, Chandrachoor Rai, Abhijeet Deshpande, Abhishek Sharrma, Grace Girdhar, and Vaishali Malhara in key roles.
Nflicks Pvt. Ltd. (Nitin Kumar & Satyavrrat Gaud) Presents a Mithya Talkies & Priyanshi Films production ‘RK/Rkay’ written and directed by Rajat Kapoor.
Tags : mallika sherawat Rajat Kapoor RK/RKAY