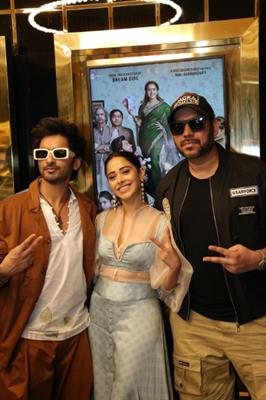 As the Nushrratt Bharuccha starrer Janhit Mein Jaari is all set to hit the screens this Friday, the actress and her co-actor in the film Anud Singh Dhaka along with actor Paritosh Tripathi and writer-producer Raaj Shaandilyaa visited Miraj Cinemas Velocity III - one of the flagship properties of Miraj Cinemas with the Maximum concept (in-house large screen format) on 8th June 2022. The super energetic team interacted with the media and had a great discussion over the film's topic and its relevance in the present times.
The entertainment industry has rebounded, and the box office is better than ever. Miraj Cinemas, one of the fastest-growing multiplex chains in India, has enjoyed ten years of success under the able leadership of Amit Sharma, MD, Miraj Entertainment Pvt Ltd. In addition to its national expansion plans, Miraj has kept up with technological advances that benefit moviegoers in tier two and three cities and their counterparts in major metropolises such as Mumbai and Delhi.
Miraj Cinemas has become India's fifth-largest multiplex operator, with 165 screens at 57 locations across 14 states and 38 cities. The company plans to expand to 200 plus screens by the end of FY 2023 by opening an additional 75 screens in a single year. It also plans to create a benchmark for launching 70-75 screens every year.
Tags : Nushrratt Bharuccha Janhit Mein Jaari Paritosh Tripathi