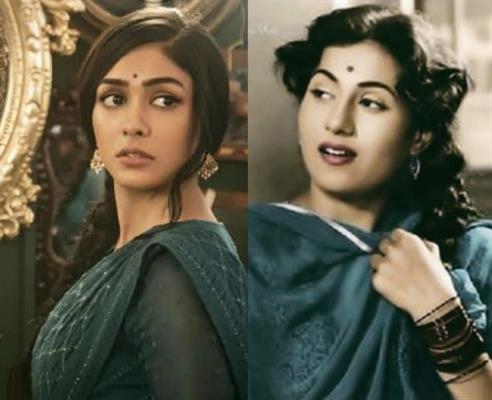 Mrunal Thakur, who was last seen in an extended cameo in Kartik Aaryan's crime thriller, 'Dhamaka' will next be seen debuting in a Telugu film opposite south sensation Dulquer Salmaan. Produced by Swapna Cinema, the film is being directed by Hanu Raghavapudi. It will be presented by Vyjayanthi Films. What's interesting is that the actor's look from the film bears a striking resemblance with the yesteryear diva, Madhubala!

Often called the most beautiful Indian actress of all time, Madhubala is an icon, so any comparison to her is a huge compliment. Despite having such big shoes to fill, Mrunal seems to love the attention: “It’s an honour to be told I resemble one of the most beautiful actresses, Madhubala ji." The actor adds, "This film just got a whole lot special for me after being associated with such a legendary actor. Really look forward to this one and I hope that my fans love the film as much as we loved making it!"