Much awaited family entertainer of the year Kuch Khattaa Ho Jaay wraps up the shoot of the film, and we can’t wait for the movie to release. 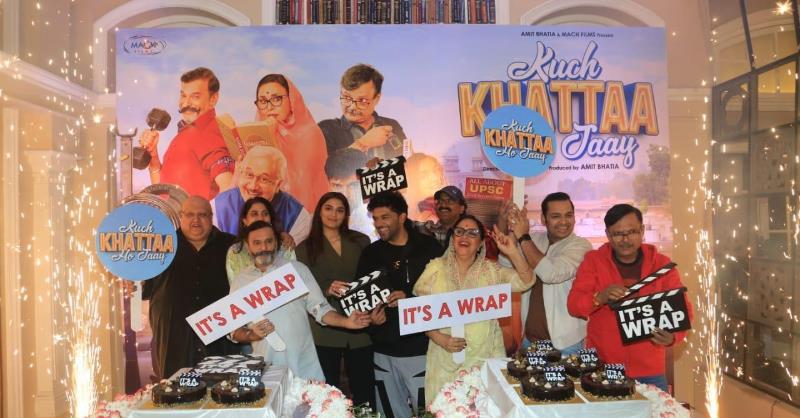 Kuch Khattaa Ho Jaay, is one of the highly anticipated films of 2023. The movie is a family comedy and is all set to refresh the audience with an interesting story. What has grabbed our eyeballs, is the brilliant ensemble cast. The film stars Anupam Kher, Guru Randhawa, Saiee M Manjrekar, Ila Arun,Paritosh Tripathi,Atul Srivastava and Paresh Ganatra in pivotal roles. The film has wrapped its shoot and threw a massive bash in the city to celebrate the same.
The film’s wrap party was attended by the entire star cast and the pictures are really captivating. Kuch Khattaa Ho Jaay has extensively been shot in striking locations across Agra and audiences can surely expect some grand and extravagant set up and scale of production.
The film marks popular singer Guru Randhawa’s debut in B-town. Apart from a promising and fresh story the film has some foot tapping and soulful music which is surely going to get the audience grooving. The film has a perfect blend of a wide range of music and we are very excited to listen to the tracks.
Well, now that the team has wrapped up their shoot, we are really looking forward for the film to hit the theaters produced by  Mach Films.
Tags : Kuch Khattaa Ho Jaay Anupam Kher Guru Randhawa Saiee M Manjrekar Ila Arun Paritosh Tripathi Atul Srivastava Paresh Ganatr